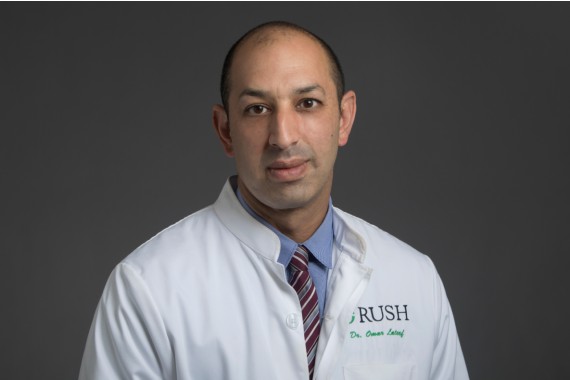 Dr. Omar Lateef became president and CEO of Rush University Medical Center in May 2019. Under his leadership, the Medical Center received national attention for its effective management of the COVID-19 pandemic, which included building a forward triage, deploying early testing, acceptance of critically ill patient transfers, and being one of the first health systems to offer antibody testing. In recognition of Lateef’s role in Rush’s response to the crisis, Modern Healthcare named Lateef one of 50 most influential clinical executives.

Lateef is a nationally recognized leader in the measurement of health care quality. He has worked with physicians and analysts at Rush and from academic medical centers across the nation to evaluate the driving factors and methodology of quality rankings by the Centers for Medicare and Medicaid Services (CMS), U.S. News and World Report and others.

In January 2020, Lateef was invited by the secretary of the U.S. Department of Health and Human Services (HHS) to serve on the National Advisory Council for Healthcare Research and Quality of the Agency for Healthcare Research and Quality. Lateef and his colleagues have evaluated and recommended changes to the rating systems to confirm that they are accurate and a fair reflection of quality. His work to ensure that key national measures are transparent, measure what they are intended to measure and have no unintended consequences has greatly affected how health care quality is reported across the country.

Prior to becoming president and CEO, Lateef was the chief medical officer of the Medical Center and of Rush University System for Health. Under his leadership, Rush system hospitals have performed exceptionally well in rankings by the Centers for Medicare and Medicaid Services, U.S. News & World Report, the Leapfrog Group and Vizient, which in 2019 ranked Rush University Medical Center first among 93 participating academic health systems across the nation in quality and accountability.

A former associate dean of medical sciences at Rush University, Lateef is a professor of pulmonary and critical care medicine. He has won numerous teaching awards during his time as a clinical educator at Rush.

In 1995, Lateef earned a bachelor's degree in religious studies from the University of Florida-Gainesville. Four years later, he received his medical degree from Des Moines University, after which he completed his internship and residency at New York University Downtown Hospital. He completed a fellowship in pulmonary and critical care medicine at Rush in 2005.

Lateef has published extensively on health care quality and delivery scientific, and has spoken internationally on methods for improving health care.