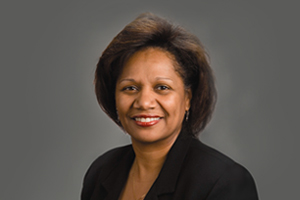 Angelique Richard, PhD, RN, CENP, has served as chief nursing officer of Rush University Medical Center since October 2016 and for the Rush System since 2018. In these roles, she provides administrative oversight and accountability for professional nursing practice, operations and performance improvement. She also serves as senior vice president of hospital operations. In partnership with the system's chief medical officer, she also supports, facilitates and advances nurses' role in Rush's collaborative and multidisciplinary approach to delivering care.

Richard has made quality of care and patient safety priorities of her leadership, with the aim of achieving zero harms to patients from hospital-acquired infections and patient falls. She expanded the Medical Center's daily safety briefings, which ensure escalation of solutions to potential safety issues from five to seven days a week. She has helped lead the implementation of a continuous process improvement system throughout the Medical Center that includes daily team huddles. Richard also instituted multidisciplinary rounds to enhance care and implemented a nursing dashboard that highlights System-wide best practices.

She has championed investment in the nursing staff through support of Rush's Office of Professional Nursing Practice, the Center for Clinical Research and Scholarship, research fellowships for nurses and the Rush Surplus Project, an initiative launched by Rush nurses to donate unused hospital food to a local food pantry and homeless shelter.

Under Richard's leadership, in fiscal year 2019 the Medical Center achieved a patient satisfaction rating that places it in the top 13% of hospitals nationwide that use the Hospital Consumer Assessment of Healthcare Providers and Systems survey of inpatients. Her guidance also has helped the Medical Center maintain its Magnet designation from the American Nurses Association, which measures an institution's strength and quality of nursing. Rush University Medical Center has achieved Magnet status for five consecutive designation periods.

In 2019, Richard took on the additional role of acting senior vice president of hospital operations for Rush University Medical Center. In this position, she focuses on developing and implementing strategies to help the Medical Center sustain excellence in its quality and safety, patient experience, employee engagement, care delivery and thoughtful growth.

A nationally recognized leader in nursing, Richard helped the Medical Center to be selected as one of three sites for The Future of Nursing 2020-2030 — National Academy of Medicine town halls. She serves on the nurse executive advisory council of the Joint Commission, the accrediting and certification body for more than 22,000 health care organizations and programs in the United States, and on the nursing executive advisory board of the chief nursing officer network of Vizient — the nation's largest health care improvement company.

She is a member of the Board of Trustees at Lake Forest College, her alma mater. She is a frequent presenter and panelist on nursing leadership and patient experience at national health care conferences.

Richard came to Rush after serving as chief nurse executive and vice president of clinical operations for the Seattle Cancer Care Alliance (SCCA). She represented the SCCA as the only invited nurse to serve on Vice President Joseph Biden's National Cancer Moonshot Summit in Washington, DC, in 2016.

Before joining the SCCA, she held senior nursing leadership positions at the University of Connecticut Health Care System; Presence St. Francis Hospital in Evanston, Illinois, which she led to Magnet designation; and Adventist Glen Oaks Hospital in Glendale Heights, Illinois.

Richard's career began at Rush. In 1984, she joined the staff as a nursing assistant at what was then Rush Presbyterian–Saint Luke’s Medical Center. She earned her bachelor's and master's degrees in nursing at the Rush University College of Nursing; worked as a staff nurse and assistant unit director on the Medical Center’s bone marrow transplant unit; and was a faculty member at Rush University. She holds a doctorate in nursing from the University of Illinois at Chicago (UIC) College of Nursing. Richard has received UIC's Outstanding Alumni Achievement Award and the Rush-Presbyterian-St. Luke's 2020 Distinguished Alumni Award.