In 2018, Nicole Montanye was in the best health of her life — drinking beet juice for breakfast and attending daily spin classes. However, at the end of the year, Nicole, who was 47 at the time, and her wife, Gabrielle, noticed she felt unusually out of breath and persistently tired.

“I felt exhausted,” she says. “But I didn’t think anything of my fatigue. I thought it was because of my emotions due to a recent death in the family.”

Within three weeks, Nicole went from participating in spin classes every day to not being able to walk up a flight of stairs. She decided to seek help and scheduled an appointment with her primary care physician.

Advocating for a diagnosis

Nicole’s primary care physician ordered blood tests and an electrocardiogram to find the issue. When her test results came back, Nicole’s hemoglobin level was abnormally low, which can lead to anemia, and can cause symptoms, such as fatigue and trouble breathing.

Her primary care physician urged her to go to the emergency room where her providers ran more blood tests, performed an MRI and endoscopy, and scheduled a CT scan for a few months later.

“My providers ruled out cancer, but I knew my body and I knew something was severely wrong," Nicole says.

So, she continued seeking out answers. After a CT scan and colonoscopy at her local hospital, Nicole was diagnosed with stage four colon cancer that had metastasized to her liver.

A coincidence that led to change

After Nicole was diagnosed, she searched for a hospital in Chicago for her cancer care. As she researched Rush University Medical Center, she realized that she had a connection to Rush: colorectal surgeon Dana Hayden, MD.

“I had been attending the same spin class with Dr. Hayden every day for two years,” she says. “Over time, we had become close friends. But I never would have thought she would one day save my life.” 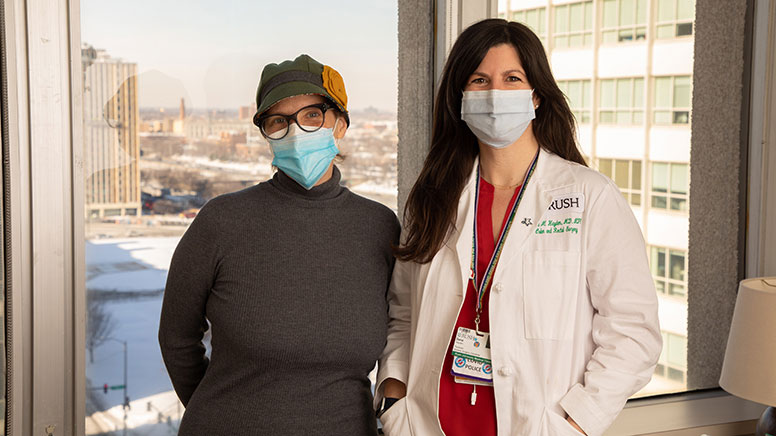 “The doctors at Rush said my case was complicated, but I had options,” Nicole says. “During our conversation and through my own research, I was inspired by the science and expertise they brought to the table. Their confidence and, of course, my trust in Dr. Hayden, is what led me to choose Rush.”

Shortly after Nicole started her care at Rush, she was admitted to the hospital due to the severity of her case and began preparing for colon surgery.

In April 2019, Hayden performed a colectomy, in which she removed the right part of Nicole’s colon, where the primary tumor was located. Hayden successfully removed all the cancer from her colon, and Nicole had no complications.

Nicole then underwent six months of chemotherapy to shrink the tumor in her liver in order for surgeons Schadde and Pappas to perform a two-step liver resection in October 2019.

In the first surgery, Nicole’s care team removed all of the lesions in her liver’s left lobe. And 10 days later, she came back for her second surgery where they cut off blood supply to the right lobe of her liver and redirected it to the left lobe in order for it to heal faster.

After Nicole’s liver surgeries, her case was presented at Rush's multidisciplinary GI cancer tumor board meeting, which included her liver and colorectal surgeons and medical oncologist, as well as a radiation oncologist, gastroenterologist, pathologist, radiologist and dietitian. They discussed Nicole's case and collaborated on the best approach for Nicole’s care. Ultimately, the team suggested chemotherapy to reduce the risk of the cancer returning.

Nicole made it through chemotherapy. But after three months, she developed side effects from treatment and her care team decided that they needed to monitor her closely.

During this time, Nicole’s body was weak from her surgeries and chemotherapy treatments, and her care team was concerned about the need to regain her strength.

Nicole has worked closely with a registered dietitian to help rebuild her strength. She regularly attends movement classes focused on reducing side effects, such as fatigue and muscle loss, associated with chemotherapy and other cancer treatments.

“I’ve enjoyed the exercise classes,” Nicole says. “It’s another great example of Rush going beyond routine prescriptions and treatments, such as chemotherapy. Food choices and exercise routines are important and this integrated approach is unique and something I truly value at Rush.”

And no matter how exhausted Nicole was, she committed to some kind of activity every day.

“Today, I'm in the best physical shape since my journey with cancer started — I’m walking up to five miles now,” Nicole says.

Living with a chronic illness

Nicole is continued her follow-up care with Rush, with regular tests and appointments. Unfortunately, in the spring of 2020, a CT scan revealed lesions on her liver and lungs.

To address this setback, her surgeons performed an ablation procedure in which they removed part of the cancerous spot on her liver. And, this past summer, her care team found a chemotherapy combination that was safe for Nicole.

“From the first day, Nicole has handled her diagnosis with absolute grace,” Hayden says. “There are very few people that could go through what she has gone through and still have a positive attitude. She’s a true inspiration.”

Today, Nicole is stable, and has no evidence of cancer on her colon or liver; however, the cancer in her lung remains and is being addressed by radiation and chemotherapy.

“I will most likely always be in treatment and I’ve accepted that as my life’s path," she says.

Nicole adds that she feels as though one of the reasons she is still here is because of the “science and stellar care” she has received from everyone at Rush.

“After two years, I’ve had experiences in every part of the hospital. And no matter if the employees at Rush can identify me through a face mask, they recognize my red onesie that I wear during treatment and always greet me with a smile and words of encouragement that helps me remain positive,” she says. “It’s so inspiring and it has been essential during my lifelong battle with cancer.” 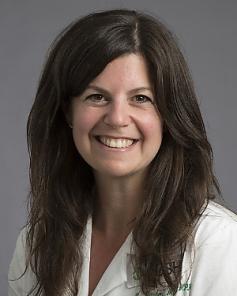 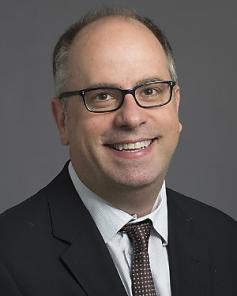 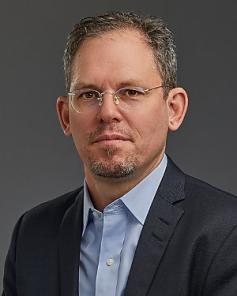