Karen Karmenzind has never smoked. She was never exposed to asbestos, and there is no cancer in her family. So she was shocked when she was diagnosed with lung cancer seven years ago.

Shortly after receiving that diagnosis, her husband’s job relocated them from Arizona to the Chicago area. The move was difficult for her.

“Moving with cancer is hard,” Karen says. “People tend to avoid you.”

She was grateful when a friend told her about Waterford Place Cancer Resource Center. She attended orientation at Waterford Place and dove right into the programs and services, starting with a yoga class.

“Going to Waterford Place was the best thing, especially since I was new to the area,” she says. “I got to know people. It’s been great.” In fact, most of her friends today are people she met at Waterford Place.

Waterford Place has helped her through its programs and services but also by connecting her with other people who have cancer.

“It helps to be around others who have the same struggles,” she explains. “We don’t have to talk about cancer. We talk about how we’re doing with yoga or about an art project or our kids.”

Waterford Place feels like home, she says, and she has stopped by the building just for a cup of coffee.

When the facility was closed due to the pandemic, she participated virtually in art classes and the Giving Back Society, a gathering in which participants engage in activities that make a difference in the cancer community. She even started a Zoom coffee chat, meeting with other participants via Zoom every Tuesday morning.

“As many as eight people would drop in,” she says. “I absolutely loved that.”

Not ready to give up

Now a seven-year survivor, Karen’s cancer journey continues. She shared some of her experiences recently at Rush’s Shine a Light on Lung Cancer event. She spoke about the many clinical trials she has participated in — “so many I’ve lost count” — and shared the story of how she was ready to give up after one trial in October 2018.

The treatment was hard on her body, she said, hard on her stomach and muscles and joints, and she had headaches.

“It wasn’t working, and I was done. I wanted to live my last days in peace,” she says. So she emailed her medical oncologist, Mary Jo Fidler, MD, and left that message. In reply, the doctor sent a two-word email: “Call me.”

When they spoke, Fidler told Karen she had one more idea: a treatment that had low side effects and positive results in patients with lung cancers similar to Karen’s. Karen agreed to try it, and it helped.

Karen was willing to try, and it paid off.

“There may be a time in the future when not a single treatment will work,” she told the audience, “but it’s not today. I encourage you not to give up either.”

She also advises others with cancer to get involved at Waterford Place. 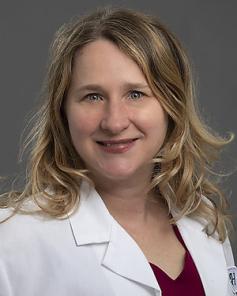