At 30 years old, Amy Belluomini was living a healthy life, working and spending time with friends and family. However, her world flipped upside down when she was diagnosed with non-Hodgkin’s lymphoma.

With a family history and high risk of developing breast cancer, Amy started getting yearly screening mammograms at 25.

But when she went in for her mammogram at age 30, something felt different. “I’d been getting mammograms for a few years with no issues, but this time it was quite painful and something was off,” she says.

She was called back for additional screening. After more tests, including a breast biopsy and MRI, she didn’t have breast cancer; instead, she was diagnosed with non-Hodgkin’s lymphoma (a blood cancer) that had spread to her breasts and lymph nodes.

“I didn’t have any symptoms and was a relatively healthy person, so this came as a huge shock to me,” says Amy. “Unfortunately, it was a stage 4 (the most advanced) cancer and that was the hardest thing to grasp. I had been healthy. I was working, hanging out with friends and just living my life. And then everything changed.”

Although the cancer was advanced, it was also treatable. Amy’s cancer team at Rush let her know that she needed to immediately start an aggressive treatment protocol for the best chance of survival.

The day after she was diagnosed, Amy was admitted to Rush University Medical Center for a one-month inpatient treatment regimen that included chemotherapy, steroids and other treatments to get the cancer into remission.

“I’d never been admitted into a hospital before, and it was quite an adjustment,” says Amy. “But I felt like I was in the best hands from the moment I came to Rush.”

Amy’s care team – which included hematologist/oncologist Melissa Larson, MD, and bone marrow transplant hematologist Sunita Nathan, MD – walked Amy through what she could expect at each point in her treatment and explained what treatment options would give her the best chance for survival.

“Once they realized how aggressive the cancer was and how much of the cancer was in my bone marrow, Dr. Nathan told me my best chance was to have a stem cell transplant,” says Amy. “Without the transplant, they said I had a 50% chance of survival — and that wasn’t good enough for me. I had things to do. I wanted to live, and I wanted to do everything possible to maximize my time and have the best quality of life.”

Dr. Nathan explained that a stem cell transplant gave Amy up to an 80% chance of survival and was her best chance for long-term survival — and possibly a cure. “Dr. Nathan sat me down for a long time and said, ‘Here are the facts, here’s what we know, here’s what we can do, and this is what I recommend — but choice is ultimately yours,’” says Amy. “She was upfront, telling me it wouldn’t be a cake walk and that transplant came with its own complications and risks. After talking to her, I felt highly informed about my disease and the treatment. I also felt really confident in my care team. So I made the right decision for myself and decided to do the transplant.”

To be eligible for a stem cell transplant, the cancer had to be remission (no sign of cancer in her body). And after Amy’s one-month inpatient treatment, it was.

One of Amy’s younger brothers turned out to be a perfect donor match, and her transplant date was set for one month after her treatment was completed. Amy also continued outpatient chemotherapy four days a week for another month to ensure that the cancer would not return.

Amy was looking forward to spending the month at home between treatments. Unfortunately, she landed back in the hospital for a neutropenic fever — a side effect from the chemotherapy treatment that requires hospitalization.

“That was such a hard time for me because they said I would have a month break between the treatment and the transplant,” she says. “I was looking forward to not being in the hospital, going home and striving for some sense of normalcy.”

Although she longed for being home, she found comfort and warmth at Rush during her long hospital stays.

“All the nurses on the 14th floor truly embody the excellence Rush strives for,” she says. “They were so wonderful to me and my family. They all have so much heart and soul. Every single person I met made me confident that I was receiving great care, and they were caring for my whole being. I can’t say enough about all them — the nurses, the assistants, the whole BMT team and Dr. Nathan especially. I was receiving much more than just medical care.”

When it was time for Amy’s transplant, she was ready and eager to take the next step toward recovery. “I was very nervous, but I felt extremely prepared,” she says. “And at that point, I was so confident in and comfortable with Rush, the unit, the nurses, the doctors and every single person caring for me.”

Shortly after receiving the infusion, Amy began to feel the effects, including mouth sores, extreme fatigue, weakness and fevers. With her immune system compromised, she was also quite isolated on the unit to make sure that she wouldn’t catch anything that could lead to illness or infection.

“My team told me, ‘Amy, it’s your job is to eat, walk and rest as much as possible. You have to focus on that and try to maintain a positive mindset because that can be the difference between a four-week stay and a six-week stay,’” she says. “So I did my best. There were definitely difficult days. Life felt stagnant at that time. But I kept reminding myself that there was an end date — that I would get out of this hospital.”

One month later, Amy came home. But she still had a ways to go to rebuild her strength and health.

“One of the most difficult parts about having a stem cell transplant is actually going home,” she says. “You want to be out of the hospital more than anything. Then all of a sudden, you’re on your own and it can be scary. You’re trying to rebuild your strength, you have to eat but you have no appetite and you’re on so many medications. I knew it was going to take a while to get back to life.”

Aside from coming to Rush for regular checkups, blood work, infusions and medication management, Amy had to keep herself pretty isolated as her immune system was being rebuilt.

“When you have a blood cancer and a stem cell transplant you have to live in an isolated way for a long time because your immune system is not mature and you can’t fight infections — and you don’t want to land back in the hospital,” she says. “So I couldn’t go to restaurants or be out in public places for a long time.”

About three months after her transplant, Amy began getting back to life.

“I was slowly turning the corner to normalcy,” she says. “I started seeing my friends and going places and just doing the little things that made me feel normal again. And, it felt really good.

“I’d remember sitting in the hospital thinking how much I wanted to just be in the kitchen cooking or doing other simple things I always took for granted. I was so grateful to be doing those things — big and small — again.”

In addition to her doctors and nurses, Amy also had support from a team of specialists — including a psychologist and nutritionist — dedicated to helping her through the emotional and physical challenges of her cancer treatment.

“My team at Rush looked at me as a whole person; they gave me the best medical care, but they also cared for me emotionally,” she says. “What I really loved about Dr. Nathan is how she used her medical expertise to care for me, but is also so kindhearted and really cares about all aspects of my life. She told me, ‘We’re going to get you back to health so you can resume your life in all the ways possible.’ She and the whole team were definitely keeping in mind everything that was important to me and my well-being. And I still feel that way with my team today.”

After 11 months of treatment and recovery, Amy finally returned to work and has a clean bill of health. She still comes to Rush for bloodwork and appointments, but she is now looking ahead to her future.

“I’ve been feeling good,” she says. “At times, I still struggle with fatigue and I still have a lot of doctor appointments. But I’m so fortunate to be here today.”

Spending so much time in the hospital gave Amy time to process what was happening — and she was committed to turning it into something good.

“I spent a lot of time thinking about what I could take from this situation to bring meaning to it all,” she says. “This experience created a pivotal shift in my thinking and what I wanted to do with my life. I knew that after my treatment I wanted to do something to help other patients and families.”

As she recovered, Amy thought about how she could address the isolation that comes with blood cancer and treatment. “I wanted to help people and their families feel connected, like they aren’t alone in this experience,” says Amy. “I want to bring people together and give them a chance to connect during their time at the hospital.”

To do this, Amy visits the 14th floor regularly and brings catered meals for the nurses, families and patients if they’re up for it. She also shares her story with others who are currently in treatment. “If I can give anyone else hope and a sense of connection, that’s meaningful,” she says. 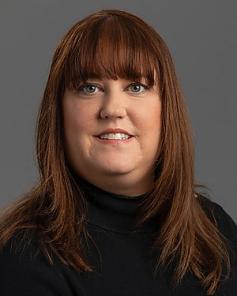