Coping with Crohn's disease: a patient, his mom and his doctor tell the story
Patient Stories
By Tyler Jankiewicz

At first, I was just having stomachaches — maybe one or two a day. They weren’t too bad, and if I went to the bathroom, they went away. This was in the fall of 2012, during basketball season my freshman year of high school. When the symptoms first started, I still felt mostly fine; I was still able to get through practices and games.

But toward the end of the season, around December, the symptoms really started affecting my physical abilities. My coach was very understanding. He said if I needed anything, like in the middle of a game if I needed to use the bathroom, to just give him a signal and he’d take me out. I couldn’t play in the last few games, though, because I would get winded quickly and felt weaker.

I had planned to play volleyball in the spring, but by then I was really sick and had lost so much weight, about 40 pounds. I’d lost all the muscle I had, so I wasn’t in good enough shape to even try out. The coach said, “If you get better, you’ll be able to play.” I sat in the bleachers and watched practice for a few weeks, but after a while I didn’t want to be there because it was too hard to not be on the court.

I still didn’t know what was wrong at that point. So my mom took me to see my pediatrician at Rush. Mom works at Rush, and I’ve been going there for care my whole life. The pediatrician thought it might be a virus and wanted to wait and see if it would go away on its own. When it didn’t, my pediatrician sent me to the pediatric GI program.

In January 2013, I had an upper endoscopy and colonoscopy. It showed there was inflammation in my small intestine and colon, and that’s when I found out I had Crohn’s disease. It was kind of a relief to know what was causing the symptoms. Dr. Randolph McConnie talked to me and my mom, and then his team came up with my treatment plan.

In the beginning the medications weren’t helping, but later Dr. Anil Kesavan, who was part of the team, kept searching for the right combination. It took a while, which was really hard. I had to be hospitalized at times and have blood transfusions. But I’m grateful that Dr. Kesavan didn’t give up and eventually found the right medications to send me into remission.

I wasn’t really myself when I was sick. Because I lost so much weight and had constant stomachaches, I just wanted to be by myself all the time. The hardest part was not being able to eat what I wanted and only being able to eat through a feeding tube. I had the feeding tube for almost six weeks, and I had to go to school with it.

But as the treatment started working and I got better, I started to feel normal again. I started talking to my friends, hanging out more and just being a normal teenager. I was able to resume all the sports I couldn’t play while I was sick. Now, I can eat whatever I want, and I’ve gained all the weight back — and more. Basically, I’m able to live my life again.

In May, I graduated high school, and now I’m a freshman at Marquette; I’m studying to be a physical therapist so I can help people like Rush helped me. Everyone was very caring, especially Dr. Kesavan. He has been more than just my doctor. He’ll talk to me about the Crohn’s, but he also talks to me as a friend. He asks how I’m doing, how school is going, what my plans are.

I haven’t had any symptoms at all since October 2014. I feel the best I’ve felt in the past three years, and I owe it all to the doctors and everyone else who took care of me at Rush. They’ve done an amazing job getting me from where I was to where I am. I’ll always be thankful for everything they’ve done.

As a pharmacist at Rush, I’ve always felt connected to the Medical Center and trusted the quality of care here. When it was clear that Tyler’s stomachaches and diarrhea were getting worse — and he was losing a lot of blood, which really concerned me — I talked with my Rush colleagues to see where I should take Tyler. We went to Dr. Randolph McConnie, a pediatric gastroenterologist, who did the colonoscopy and diagnosed Tyler’s Crohn’s disease, and Dr. Anil Kesavan was brought in to consult, so we had a good team in place to guide the treatments.

Unfortunately, most of the early oral medications failed. We switched to an injectable medication, which was difficult. I wanted him to stay in school and not have to miss a lot, but he had to come to the hospital periodically to get both infusions and blood transfusions because he was losing so much blood.

He also couldn’t eat and had to have a feeding tube inserted to get nourishment because he was losing so much weight. He was down to 115 pounds, which was just terrifying. That was the hardest part: He could only be fed through a tube. I didn’t want to eat in front of him, so my husband and I would eat in another room. We tried to be sensitive and not to eat in front of him, knowing that he couldn’t eat.

Tyler had always been so active, always playing sports, and to see him on the sidelines unable to compete was heartbreaking. I worried about him just walking through school and getting up the stairs to his classes, but for the almost six weeks he had the feeding tube, even though he was anemic and really weak, he still went to school.

Dr. Kesavan knew I was a pharmacist and worked at Rush, and he treated me as a professional. He knew I was reading and doing research on my own, so from the first day we met with the pediatric GI team, we had many discussions about what would be the best therapy and the best medication doses for Tyler.

When Dr. Kesavan was trying to change Tyler’s medications, he did it very thoughtfully and very slowly just to make sure that Tyler stayed healthy. And he made sure Tyler was involved in the conversations so he understood what was going on.

Crohn’s disease is a chronic illness, and you never know how long he’ll stay in remission for before they have to change his regimen. But Dr. Kesavan constantly checks Tyler’s labs and follows him very closely, and we also see him for regular checkups. Tyler has been in remission now for more than 18 months, and it’s great to have him back to normal. When Tyler started to gain his weight back, I was really happy to see him being able to participate in sports again and being more lively.

We’ve always received great care at Rush. The staff was wonderful about helping us schedule appointments around Tyler’s school and sports, and my work. When Tyler was in the hospital, the nurses and doctors not only took great care of him, but took an active interest in Tyler himself and what he was doing: school, his sports. They were able to interact with a teenage boy and make him feel comfortable. And any time I have a question or concern, I know I can call or email Dr. Kesavan or one of the nurses and they will respond quickly, which helps me feel less stressed.

My greatest hope for Tyler is that he stays in remission. He’ll continue to have checkups with Dr. Kesavan to make sure that if anything happens, we can address it quickly. We actually looked at colleges that were close enough to enable him to stay at Rush for his care. I’m just happy that he’s been able to go away to college because three years ago he was so sick, I never thought it would be possible.

I first met Tyler Jankiewicz and his mother, Ann, in August 2013, when he was 15 years old. Tyler had been referred to Rush’s pediatric gastroenterology program seven months earlier and was diagnosed with Crohn’s disease, a chronic autoimmune disease that causes inflammation throughout the intestinal tract. People with Crohn’s experience a variety of symptoms (abdominal pain, diarrhea, vomiting, blood in the stool), as well as weight loss, inflammation in the eyes and skin, fevers and joint pain.

Tyler first started having symptoms in December 2012, and his condition had progressed dramatically. He couldn’t eat and rapidly lost 40 pounds. By the spring of 2013, his weight was down to 115, and he didn’t have the strength or stamina to play volleyball on his high school team. He was anemic, and his condition was worsening.

My colleagues and I believe it’s essential to get to the root of our patients’ problem — not take a Band-Aid approach and only treat the symptoms. We want our patients to feel better because we’ve effectively addressed the underlying cause.

Tyler had severe disease in both his small and large intestine, so our treatment goal was twofold: first, stop and reverse all inflammation, and second, prevent it from coming back. Our team put together a treatment plan that used nutritional therapy, which included short-term placement of a nasogastric feeding tube (one that goes through the nose into the stomach), and a combination of oral and injectable medications.

It is important to us to always be empathetic about our patients’ conditions. We want them to know that we have an understanding of what they’re going through, and that we are here to help them. Every patient we see is unique, so every care plan is unique. We strive to educate parents on the medical options that are available for their child, and then work with them to figure out a treatment option that works best for that family.

I say for the family — not just for the child — because in every pediatric specialty, parents play a crucial role in both the treatment process and the child’s overall health and well-being. Parents know their child the best; I trust their opinions and rely on them to tell me what’s going on with their child. If a child is going to get better, the parents must be partners with the clinical team.

That has definitely been true of Tyler’s parents — and of Tyler himself. They were all very motivated and worked really hard to get him healthy, even though at times it was extremely difficult.

Tyler’s treatment course was long and required many medication changes before we were able to achieve remission. Tyler has been completely asymptomatic since October 2014; he has gained more than 50 pounds from his lowest weight. It took him awhile to regain his strength, but he is now able to play volleyball, basketball and football again.

He was also able to graduate high school on time, which is truly amazing considering how sick he was. It is a blessing to see the tremendous progress he has made from when I first met him to now.

He started college in August and I look forward to seeing where his future takes him. My goal is to keep him in remission so he can focus on the important things in life, growing up and achieving his dreams. That’s the hope I have for all of my patients. 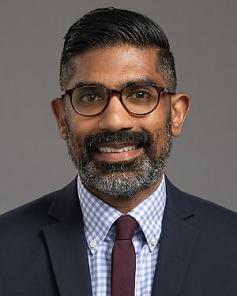