Many people with hemorrhoids don’t get help — often because they don't realize relatively painless treatments are now available.

If hemorrhoids were a problem people talked about easily, you might know how common they are. In fact, most people have them at some point in their lives.

According to Theodore Saclarides, MD, a colorectal surgeon at Rush University Medical Center, many people with hemorrhoids don't get help — often because they don't realize relatively painless treatments are now available.

As an academic medical center, Rush is always looking for better ways to treat this common problem. Rush offers traditional treatments and minimally invasive procedures, which are less painful and provide faster recovery than conventional surgery.

They can be internal or external and may cause pain, itching or burning. You may also see bright red blood on toilet paper or in the toilet after a bowel movement. Internal hemorrhoids may prolapse, or bulge, outside the anus.

Diarrhea, constipation, prolonged straining, pregnancy and aging can all cause hemorrhoids — as can simply standing for long periods.

For minor symptoms, you can try doing the following:

If your symptoms don't go away in about a week despite home treatment, though, it's time to see a doctor.

Also see your doctor if you see blood in your stools or on toilet paper, especially if you're older than 50 or have a family history of colon cancer. Although hemorrhoids don't cause cancer, bleeding can indicate other health problems, including colon or rectal cancer.

Depending on the size and location of the hemorrhoid, your doctor may decide to perform one of the following surgeries right in the office:

Minimally invasive procedures have less risk and fewer postoperative problems than traditional surgery. And patients are often surprised at how well they work.

For hemorrhoids that recur or are too big to treat with an office procedure, doctors have traditionally used excisional hemorrhoidectomy. This surgery removes the hemorrhoid but can be very painful.

Although excisional hemorrhoidectomy is sometimes still necessary, doctors at Rush also perform two minimally invasive procedures that can get patients back to normal activity in about half the time:

These minimally invasive procedures have less risk and fewer postoperative problems than traditional surgery. And patients are often surprised at how well they work, Saclarides says. "People who have these procedures feel much less discomfort than they expected," he says. "They quickly get back to enjoying life." 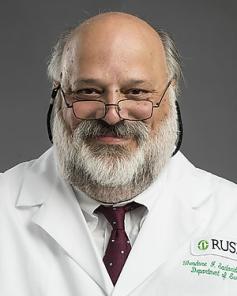 RUSH to Partner With Medtronic to Create Innovation Hub