Victor Harris was dying, but his care team at Rush Copley saved his life and supported him on his journey to a full recovery
Patient Stories
Victor Harris with occupational therapist Janet Adcox
By Donna Fisher

What a difference a few weeks can make.

Victor Harris, 58, of Aurora, lay in a hospital bed, recovering from organ failure and unable to speak or move his arms or legs.

Fast-forward three weeks: Victor sits on the edge of his hospital bed, preparing to be discharged to his home and grateful to share his story about how the health care team at Rush Copley helped him.

“No. 1 — they saved my life,” he says. “Then, they helped me walk and talk again. They gave me my quality of life. They were a blessing. I am thankful.”

Doctors believe Victor’s health crisis resulted from a COVID-19 infection. He experienced swelling and an infection in his gums a few months following a COVID-19 diagnosis, and a blood test indicated his organs were shutting down. His physician immediately called him at work and told him to admit himself to the emergency room.

“My liver, kidneys and heart were failing. I was dying,” Victor says.

Fortunately, a team of health care providers and specialists acted quickly to save his life.

“It was obvious that he was very ill,” Milani says.

While in the hospital, Victor had ports on either side of his throat to administer steroids and antibiotics. He was experiencing both kidney and respiratory failure. His team put him on dialysis, a treatment for kidney failure to filter his blood to remove toxins, and they intubated him to help him breathe. The cardiology team treated Victor for pericarditis/myocarditis, an inflammation of the sac surrounding his heart and heart muscle.

This multidisciplinary team spent the next two weeks adjusting Victor’s treatments until he was out of danger.

Milani coordinated Victor’s care but says it was “a heroic effort by a team of physicians and nurses that saved Victor’s life.”  The team included Harry Rubinstein, MD, kidney specialist with Fox Valley Medical Associates - Aurora, who got Victor’s kidneys working again, and Hesham Hassaballa, MD, FCCP, with Sound Physicians, an integral part of his team in the ICU.

Once out of critical care, Victor’s challenges weren’t over. He transitioned to Rush Copley’s inpatient rehab facility to address severe weakness in his arms and legs — a result of being critically ill and the steroid treatments. He was finally breathing on his own, but he couldn’t speak or move his arms or legs.

“My body had been through trauma,” he says. “I couldn’t even raise my arm to scratch my nose.”

Support through a challenging journey

With encouragement from his therapists and doctors, Victor learned to walk again, but it was a slow and sometimes painful process filled with physical and emotional challenges.

Victor recalls that when occupational therapist Janet Adcox, OTR/L, first massaged his muscles and moved his arm, the muscle locked and it hurt, and he was frustrated. However, within two or three days, he could raise his hand — a small movement but a huge accomplishment.

Every day when Adcox entered his room and told him to wash himself, he responded, “You know I can’t do it.” She told him, “Yes, you can — you can do it,” and, eventually, he did.

At times, Victor was discouraged and resentful but he soon learned that the therapists were on his side. “I had to learn that everything they did was for me,” he says. “I saw that they really cared. Janet told me, ‘It’s going to be alright.’”

Physical therapist Dante Galang, PT, worked with Victor to reawaken the muscles in his lower body, and, within days, he could move his legs. Three weeks later, he was walking with a walker. “It feels so good to walk,” he says.

Milani and resident Keirsten Reilly, MD, visited Victor daily throughout his rehab stay to monitor his condition and encourage him to focus on his rehabilitation. They provided support and encouragement at a time when his family was not permitted to visit due to COVID-19 visitor restrictions. Victor recalls the doctors sitting and talking to him for hours. “The staff here is incredible,” he says.

Victor proved himself to be a fighter. “When Dante asked for 10 repetitions of an exercise, I gave more. I kept striving,” Victor says.

That’s one reason Victor went home four days earlier than expected. He never gave up.  He was motivated by thoughts of his family, including his wife, children and grandchild, and friends — and because he has “too much to do.” When they could not visit him in person, Victor’s friends supported him through caring text messages and calls.

He calls surviving the “hardest thing I’ve ever done” — more difficult than the two bouts of cancer he survived. He is grateful to every member of his health care team.

“They were a blessing. All of them were gifts,” Victor says. “Every nurse I had was wonderful. They treated me like gold — even when I was mean to them. No one ever disrespected me. They were so sweet. It takes special people to do this.”

He learned not to take anything for granted.

“God put all those people in front of me for a reason,” Victor says. “He gave me a second chance.” 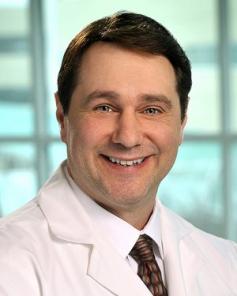