Women with early-stage breast cancer may now receive a one-dose radiation treatment at the same time as lumpectomy surgery, eliminating the need to return to the hospital daily for up to six weeks for post surgical radiation treatments.

After the breast cancer is removed, a catheter-like device with a balloon at the tip is inserted into the lupectomy cavity. The balloon is inflated with saline and the radiation therapy source docks precisely into the catheter to deliver radiation to the breast tissue surrounding the cavity where the tumor was removed, while avoiding radiation to nearby organs. At the end of radiation treatment, the balloon is deflated and easily removed and the cavity is closed.

“We currently perform IORT for women with early-stage breast cancer.  However, there is exciting research about using this modality for other types of patients, including those with breast cancer recurrences or those who are undergoing a nipple-preserving mastectomy,” said Dr. Andrea Madrigrano, assistant professor of surgery, Rush University Medical Center.

“While recovery time from surgery with intraoperative radiation therapy is the same as surgeries performed without IORT, the patients’ overall time spent in the hospital receiving treatments for breast cancer is drastically decreased. This option allows patients to return to their lives faster by potentially reducing the need for further therapies and enhancing their quality of life,” Madrigrano said.

IORT can be an especially important treatment option for women who live in rural areas and must travel a great distance for their breast cancer treatment,” Madrigrano said. “The distance creates a real obstacle for women to repeatedly return for radiation treatment. Unfortunately, these women often choose to have a mastectomy in order to avoid the need for radiation.”

IORT is still not widely available in the United States, but has been used in Europe since the 1990s. It started being used more extensively in the United States about a decade ago and has been studied in clinical trials. Rush began treating with its IORT unit in 2014. More than 50 women have been treated with IORT by Madrigrano and her colleagues at Rush.

Breast cancer patients at Rush are able to be seen by a medical oncologist, a radiation oncologist and a surgeon at the same time at the Coleman Foundation Comprehensive Breast Cancer Clinic. These cancer physicians work as a team to outline a well-defined diagnosis and treatment plan for each patient.

According to the American Cancer Society, approximately 40,000 women die annually from breast cancer and 232,670 new cases will be diagnosed in women each year. 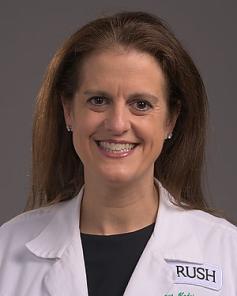