Richard Cole knew if he faced a serious health challenge he would go to Rush for care. Even though he was living in Florida when he first developed symptoms of Parkinson’s disease, Cole, who grew up in Huntley, Illinois, returned to be treated at Rush.

Cole met Christopher Goetz, MD, the Parkinson’s Foundation Chair in Neurological Sciences and former director of the Section of Parkinson’s Disease and Movement Disorders at Rush, who oversaw his treatment. As a patient at Rush, Cole had the opportunity to receive expert care from Goetz as well as a number of other neurologists due to the team’s collaborative patient care, education and research model. Based on years of positive experiences, he decided to help the people at Rush who helped him.

“When it came time to settle his affairs, he instantly knew he wanted to support the whole movement disorders group at Rush after the personable experiences he had,” said Norlaine Elsbury, Cole’s daughter. “My father said several times if he could just make a difference and help somebody down the road, he knew he wanted to do what he could.”

The Cole endowment is enabling physicians at Rush to continue providing the type of time-intensive and highly specialized care that has made Rush a premier center for Parkinson’s treatment. Endowed funds, like the one established by Cole, ensure that support for continued discovery and development of new treatments will be available far into the future.

“If we can learn signs of the disease sooner and stop the progression so people don’t suffer the way my father did, it would be amazing,” Elsbury said. “That’s what my father had hoped for when he made his decision to support the program at Rush.”

Learn more about supporting movement disorder care and research at Rush by contacting Brigid Mullen at (312) 942-4460 or brigid_t_mullen@rush.edu. 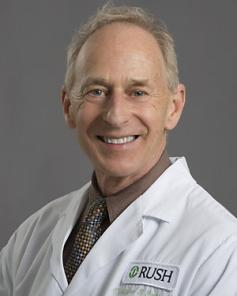