Home / News / The Future of Emergency Response Is Here

The Future of Emergency Response Is Here 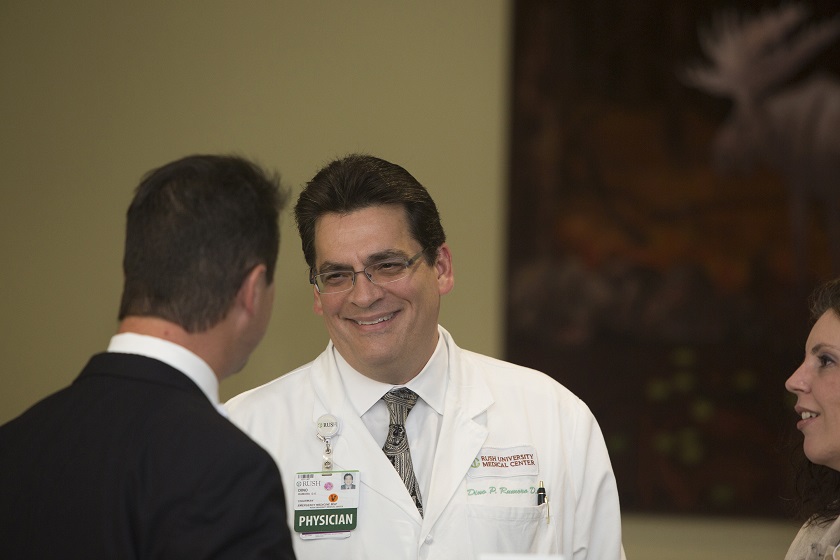 In the early 2000s, Dino Rumoro, DO, MPH, had a vision for what an emergency department could be, and needed to be.

When the Sept. 11 terrorist attacks took place, Rumoro was only a little more than three months into his role as clinical chairperson of Rush University Medical Center’s Department of Emergency Medicine. After 9/11, he set out to create the emergency department, or ED, of the future. Establishing the Robert R. McCormick Foundation Center for Advanced Emergency Response, Rumoro took an ED stuck in the past and transformed it into a state-of-the-art center for emergency preparedness, paving a path for a new era in emergency medicine.

As COVID-19 began to make its way across the United States early this year, hospital systems around the country scrambled to prepare for an influx of patients. But Rumoro and his ED team were ready from the start.

Rumoro had built and restructured Rush’s emergency department to handle a pandemic like COVID-19. Because the ED has the ability to completely separate patients with COVID-19 from others in the department, and the rest of the hospital, Rush was able to lower the risk of exposure to the disease and cross-contamination among both staff and patients.

Rumoro’s emergency department has proved to not only be a game changer in emergency medicine but also has helped Rush become a leader in COVID-19 response.

Starting from the ground up

Rumoro graduated from Chicago College of Osteopathic Medicine, Midwestern University and completed his residency in emergency medicine at Cook County Hospital (now John H. Stroger, Jr. Hospital of Cook County). After his residency, he went to work in the emergency department of Resurrection Hospital on Chicago’s far northwest side.

After six years at Resurrection, he felt like he had hit his peak in that system, and Rumoro went looking for a new job, which led to him learning about an opportunity at Rush.

In 2000, Larry Goodman, MD, then Rush’s senior vice president of medical affairs, and soon to be the Medical Center’s CEO, was tasked to start a clinical department of emergency medicine.

“He (Dr. Goodman) said I’m really looking for someone to go in there and start a department of emergency medicine,” Rumoro recalls. “And I said, ‘yeah, I’ll do it!’”

While Goodman told Rumoro to take some time to think about the position and the hard work it would take for a project of this magnitude, Rumoro was eager to accept the role and start. Leaving Resurrection for Rush, he set out to be a leader in emergency medicine for the city of Chicago.

When Rumoro came to the Medical Center, Rush wasn’t well known for its ED — which at the time was called emergency services — causing some to question his choice to leave Resurrection. At the time, Rush was one of the last hospitals to start focusing on a department of emergency medicine. Why leave a well-respected department for one that barely had its footing?

What some couldn’t understand was that this situation was exactly what Rumoro wanted. At just 37 years old, he would take over the Rush emergency department and rebuild it from the ground up.

“To take on a department at the age of 37 was really young. But part of that was good, because I had the energy for it,” Rumoro says.

'What is our identity?'

Rumoro joined Rush in June of 2000, and on July 1 at 7 a.m., he and his team became the Department of Emergency Medicine.

“The first thing I asked myself was what was our identity going to be,” he recalls.

Soon after Rumoro asked this question, the 9/11 attacks took place. As the country struggled with the loss of Americans on home soil and a lost sense of security, it became apparent hospitals around the country needed to shift their focus to emergency preparedness. For Rumoro, this solidified his decision to rebuild and restructure the Rush ED.

Knowing that Cook County Hospital was already a Level I trauma center, and Rush had opted out of becoming a trauma center back in 1970s and 80s, Rumoro shifted his focus away from trauma and began to look at bioterrorism and being prepared for a major increase in patients after a cataclysmic event.

In the early 2000s, a fear of a terrorist attack in the form of anthrax or the release of some other type of infectious disease was fairly common. The medical care for these types of attacks would need complete separation from regular ED visitors and a way to make more space for a sudden influx of patients.

“I had my answer for what our identity should be,” Rumoro remembers. “We are going to take patients from chemical and biological disasters. And I was going to create the first — what I called at the time — medical trauma center.”

Rumoro saw that there was a need for an area that could handle patients infected with or exposed to agents such as anthrax, smallpox and sarin gas that wouldn’t lead to cross-contamination among staff and other patients. Getting away from the word “trauma,” Rumoro and his team referred to it as the first civilian CBRNE (chemical, biological, radiological, nuclear and explosive) response center.

While Rumoro was focusing on the emergency department, Rush was planning a new hospital building, which would soon come to be known as the Tower. Rumoro began to work with his Rush colleagues who were planning the Tower, so that his envisioned ED and the new building would be compatible.

Ultimately, the Tower was designed and built to include the new emergency department as part of its first floor. When the Tower opened in January 2012, the ED relocated from a more than 100-year-old building at the far edge of Rush’s campus and became the nation’s first center for advanced emergency response.

“It was a great opportunity to say, let’s build what I envision a response center like this would look like,” Rumoro says.

Named the Robert R. McCormick Foundation Center for Advanced Emergency Response, the new state-of-the-art emergency center gave Rush the capability to not only expand but also to diagnose and treat victims of pandemic outbreaks or hazardous materials spills.

“We said to ourselves, ‘since we are building this all from scratch, lets design three main components into emergency response, so we can carry through with this idea of an CBRNE response center,” Rumoro explains.

These components are mass decontamination, surge capacity and a respiratory protocol with negative airflow and respiratory isolation units.

The emergency department is divided into three 20-bed units, called pods, each of which can be isolated with separate air handling. Every ED bed is in its own room with a door, not a curtain (as is common in some EDs), that further isolates each and every patient. The ED also includes an ambulance bay that can transform into an area where infected patients can be isolated for further evaluation.

The ambulance bay plays a critical role in maintaining the ED during a crisis. When the bay is turned into another unit, it separates highly infectious patients from others coming to the ED for other reasons. The ambulance bay also includes overhead showers that can help with the decontamination of patients who are have been exposed to chemicals or other biohazardous materials.

This feature gives the ED the ability to care for any person that walks through the doors. No one who comes to Rush will need to go without care out of concern of contracting a highly aggressive contagion.

The ED also has the ability to convert space to be used for high volume screening. If Rush sees a rapid influx of patients, the ED can easily create space for rapid triage.

By the time the Tower had been built and the emergency department revamped, the ED had more than doubled in size from its original configuration in an outdated building. Rumoro had created a department that could respond to potential natural and manmade disasters and have the capability to increase beds with a biocontainment unit.

When creating an emergency department that is prepared for large-scale health crises, the hope is that you never have to use it for that reason.

Unfortunately, in 2020, the unique capabilities in the Tower and emergency department finally had to be put to use. When COVID-19 arrived in Chicago, Rumoro and his team turned the ambulance bay into a rapid triage unit where patients could be tested for the illness immediately.

“We used the design of the ER to our advantage,” Rumoro says. “We took the ambulance bay, and instead of using it for decontamination, we used it as a unit for COVID patients under investigation.”

Rumoro’s team was able to create an environment that was safe for every patient, whether they had a broken bone, a heart attack or were in fact, COVID-19 positive.

“This is the first time we get to test it,” Rumoro says. “And it’s working.

“We could be in a COVID-19 world from this point on, we may not. No one really knows the answer for that,” Rumoro reflects. “In the hospital setting, what we are preparing for, for the next two years, if not from now on, is always having a workflow where we are screening for infectious diseases.”

The commitment to preparedness and Rumoro’s vision for a specialized ED gave Rush the capacity to become a leader in the fight against COVID-19 in Chicago, caring for the community it serves while helping educate institutions across the country on infectious disease preparedness. It might not have been possible if Rumoro had never taken a chance on a little-known ED and vision for something greater.

‘This Is What Rush Was Built For’

Rush University Medical Center is officially operating in surge mode, as preparations for a potential sharp increase in patients with COVID-19 move into a new phase.

Rush’s current emergency department will close early Friday morning when the department goes on bypass during the move to the new facility.

Identifying Threats Before They Spread

Software developed by Rush emergency physicians and researchers can predict a variety of illnesses in emergency room patients hours before physicians can complete a diagnosis.