Bill Krause traveled all the way from Alabama to Illinois to have his wrist surgery performed by Jonathan Tueting, MD, an orthopedic surgeon with Rush Copley’s Hand and Upper Extremity Center, and has “nothing but accolades” for the doctor and the procedure.

A tear misdiagnosed as a sprained wrist nine years ago resulted in “a lot of pain,” Bill says, and the corrective surgery he had at the time failed to provide relief. The four-corner fusion procedure recently performed by Tueting enables Bill to boat, bike and do all the things he enjoys — pain-free.

Bill, who lived in Illinois until he retired and moved to Alabama, trekked back to Illinois for the surgery after an occupational therapist recommended Tueting. Since physical and occupational therapists work with patients following surgery, Bill believes they have special insight into which doctors provide the best outcomes. “They see what the best results are,” Bill says.

The four-corner fusion procedure reduces pain from the joint while still preserving its motion. Following the surgery, Bill went home with a temporary cast. He returned to Rush Copley two weeks later for the hard cast.

“The surgery went well and recovery has been good,” Bill says. In fact, the 60-year-old says his physical therapy was ahead of schedule. Determined to have a good outcome, he completed his physical and occupational therapy and closely followed his care team’s instructions and recommendations.

A year later, Bill is fully recovered. Tueting says his patient’s bones have fused and his X-rays look great.

“I don’t have any pain,” Bill says. “I am now able to do all the activities that I was able to do before surgery — actually more. I can ride my bicycle trainer with no issues with any grip positions or pain. I am pain-free returning to weightlifting, too.” He no longer takes pain medications.

“I do not have to restrict any of my previous activities,” Bill says. Tueting even encouraged him to continue mountain biking, and Bill is excited to have ordered a new bicycle.

“Having had several bad experiences with previous surgeries makes me so much more appreciative of a physician of Dr. Tueting’s caliber,” he says. “Every visit I’ve had, I’ve seen Dr. Tueting and was treated like I was the No. 1 person for that day. I wouldn’t hesitate to recommend him to anyone with any wrist problem. I am extremely satisfied with the outcome – it has exceeded my expectations." 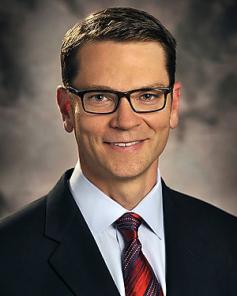