Food Fight: Your Diet Is Good Defense Against Cancer

5 Things You Can Do to Prevent Cancer

Two experts weigh in on how you can devise a cancer prevention action plan.
Read More

A healthy diet can be a powerful force against colon disorders — including cancer. Here are some tips for a...
Read More 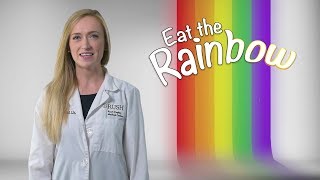 How eating a "rainbow" of fruits and vegetables get benefit your health.
Watch Now

Even if the threat of cancer is not imminent, the possibility feels like it constantly lurks in the background of your life. And the statistics don't help. The Centers for Disease Control and Prevention reports that cancer is the second leading cause of U.S. deaths, and one out of every four of these deaths is due to cancer. So clearly, you feel the need to be vigilant.

With these daunting statistics, it makes sense that you'd want to make choices that could help your own personal odds. And one choice that is within your control is the food you eat.

So eating foods that provide the proper nutrients keep our cells healthier and give us a better fighting chance against cancer.

Gustashaw and Joyce Chen, MD, a family medicine physician at Rush South Loop, help further explain the relationship between what you eat and cancer.

The origins of cancer

First, it's important to understand how cancer starts in the body. Cancer is a disease where gene mutations cause abnormal cells in our body to divide uncontrollably, and because of that it destroys normal cells as well.

"We're actually born with some gene mutations, which are inherited from our parents, but there are a lot of cases that involve external forces," Chen says.

External forces can include any of the following:

"When you're repeatedly exposed to [these external forces] or have prolonged exposure to them," Chen explains, "it’s basically the cumulative damage that will put you at risk for cancer."

Some external forces that have the potential to cause cancer are things you're exposed to such as radiation or a virus. But other external forces are things you ingest as part of a behavior, like the harmful chemicals in cigarettes and processed foods. Controlling those factors can be crucial for cancer prevention.

Cancer's connection to the GI system

You have a great deal of control over your food choices, which is important because your diet plays a key role in cancer prevention. According to the World Cancer Research fund, colorectal cancer is the third most common cancer. Your gastrointestinal (GI) system houses a lot of your immune system. And your immune system is your body's way of fighting off diseases, like cancer. That's why learning how to keep your gut healthy is a great step toward cancer prevention.

Gustashaw explains how cancer literally breaks down in your GI system. "The more time anything potentially toxic or unhealthy sits in your gut, the more time it has to react with the cells that are there and also affect the gut flora (the good and bad bacteria in your gut)," she says.

An efficient GI tract will process food in and out of your system so it doesn't linger; the less things stay around in your GI system, the less time they have to cause toxic issues.

With so much information-sharing and finger-pointing from friends, family and social media about what causes cancer and what doesn't, it's hard to know what to believe when it comes to which foods are beneficial and which ones are potentially harmful. Let's help clear up the confusion.

Sugar
Although there's a lot of talk about sugar feeding cancer cells and speeding up their growth, the truth of the matter is that most people misunderstand how sugar behaves in the body — giving sugar a pretty bad rap.

Every cell in your body requires glucose, and cancer cells are no different. "So when you have a lot of cancer cells they're going to take to that sugar. But just because they're eating the sugar doesn't make those cells directly grow faster than any other cell in your body," Gustashaw explains.

After reviewing several of these studies, the Food and Drug Administration (FDA) found that the mechanism in artificial sweeteners that causes cancer in rats is not relevant to humans. The guts of rats and humans are not identical so take caution when translating research outcomes from rats to humans.

Ultimately, Chen concludes, "With sugar, I don't think there is an actual association with cancer in humans."

Despite that, moderation is still important, especially with added sugars, or sugars not naturally found in foods but are added. Added sugars increase your calorie intake but offer no essential nutrients.

The 2015-2020 Dietary Guidelines for Americans recommends no more than 10 percent of calories from added sugars daily. That's equivalent to about 12 teaspoons, or 200 calories, for a 2,000-calorie diet.

Processed foods
Whole foods, which are foods that are unprocessed or as unprocessed as possible, are a lot healthier for you than processed foods filled with preservatives and additives. These can potentially build up in your body and become carcinogenic over time. But with processed foods, the key is to what extent the food is processed, and of course, moderation.

"With a lot of these food sources that might cause cancer, it's more of the cumulative effect," Chen says. "Like, how often are you eating these foods? Is it daily with multiple meals throughout the day, or is it every once in a while?"

One study revealed that if the foods are ultraprocessed and consumed in increasingly large quantities, they may be linked to a 10 percent increase in cancer risk. However, the study also concluded that more research would need to be done to prove definitive cause and effect.

Examples of ultraprocessed food include the following:

Gustashaw adds another thing to consider: "My take-home message to everybody is it's mostly what we're not eating that is causing more of a risk."

So what do we need to be eating? Gustashaw recommends having fruits and vegetables every day, but ideally more vegetables than fruit since "it's really hard to overeat vegetables," she says. Gustashaw also recommends some other key foods, including the following:

Literally, the next time you eat, you can make a better choice — and potentially reduce your risk for cancer and other diseases.

Canned foods
The trouble generally reported with canned foods comes from the actual cans themselves vs. the food inside. For years, aluminum cans contained Bisphenol A (BPA), an industrial compound used to line the insides of cans and bottles to preserve the contents. BPA has been linked to cancer, as well as a number of health conditions, such as heart disease and diabetes.

Now, more often than not, you can find BPA-free cans and bottles everywhere you shop. But that hasn't squelched some people’s concerns about canned foods.

Another worry is high salt content, but Gustashaw offers a simple solution.

"You can reduce extra salt that comes along with some canned products by about 40 to 60 percent by rinsing your canned vegetables," she says.

Since vegetables are great cancer-fighting agents, getting the nutrients, even from a can, are shown to help prevent cancer and improve your overall health.

"Eat your fruits and vegetables, getting a variety from the least processed fresh, canned and frozen sources," Gustashaw recommends.

In the late '80s, scientists created herbicide-resistant soybeans by inserting certain genes into the vegetable. This allowed farmers to cheaply and easily control weeds while also producing large yields. Later, more GMO crops were developed that were resistant to not only herbicides, but pesticides, antibiotics, diseases and insects.

There's still not enough research to determine if these GMOs are harmful to your health, and in the meantime the FDA has stated that they're safe.

Gustashaw feels GMOs are not as insidious as people make them out to be — if we use the right amount of precaution.

"We have to be careful how we're using GMOs in our foods and the reasons why we're doing it," she says. "But if farmers can grow a tomato that's more resistant to its environment, and you can end up with food that has a higher nutrient and vitamin and mineral content, while not negatively affecting the environment, it's a good thing."

Washing your fresh produce well before eating it, buying domestic or organic produce and eating frozen or canned options can all help reduce your exposure to pesticides.

Both Chen and Gustashaw recommend increasing your fiber intake and taking probiotics — which contain live microorganisms found in foods such as yogurt and supplements — to promote the healthy bacteria in your gut and help your intestines break down your food.

"Keep track of your bowel movements, and if you notice any changes, let your doctor know," says Chen. "Also, try to eat a well-rounded diet that includes fruits and veggies, and limit your alcohol intake."

Gustashaw adds that prebiotics, a type of dietary fiber that doesn't actually contain bacteria but helps fuel its growth, can also help improve gut health. Good sources of prebiotics can be found in the following foods:

And remember: Food is not the enemy here. It's about making good choices. "Don’t be so afraid of foods. Just always try to start with foods you know are good for you. Let those foods help you fill up first, and if you still need a 'treat,' this will help you eat less of it," Gustashaw says.

She also says don't be afraid that it's too late to change your habits and your choices. "Literally, the next time you eat, you can make a better choice — and potentially reduce your risk for cancer and other diseases," she says. "That's pretty powerful. All the things that you do, do add up."

In part 2 of the series, we’ll explore what factors are likely to cause cancer and what to do about it.

5 Things You Can Do to Prevent Cancer

Two experts weigh in on how you can devise a cancer prevention action plan.
Read More

A healthy diet can be a powerful force against colon disorders — including cancer. Here are some tips for a...
Read More

How eating a "rainbow" of fruits and vegetables get benefit your health.
Watch Now

Could you resist the temptation of sinful snack foods and calorie-rich beverages every day for the rest of your life?

With so many options, it's easy to make leafy greens a more prominent part of your plate — from side dishes to entrees.

The Mediterranean diet is associated with slower rates of cognitive decline in older adults.