Find a neonatologist Request an appointment

Aloka Patel, MD, is an assistant professor of pediatrics and an attending neonatologist at Rush University Medical Center in Chicago,...
Watch Now 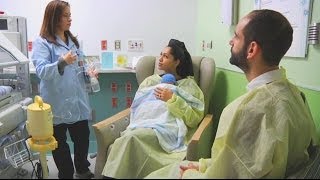 Why breast milk is best for babies, and is good for moms, too.
Read More

While pregnancy can be one of the most exciting and empowering times in a woman's life, it can also be a time of great uncertainty.

One of the biggest concerns for many expectant mothers is delivering their baby prematurely — earlier than 37 weeks. About one in nine babies are born prematurely in the U.S. each year. Premature babies have a higher risk for health problems and complications; the earlier they are born, the more severe their health issues are likely to be.

Decades ago, prematurity was a major cause of infant deaths. Today, however, the combination of advanced medicine, improved prenatal care and an emphasis on family involvement in the neonatal intensive care unit (NICU) have led to increased survival rates among premature babies. Today, 90 percent of babies who are born at 28 weeks or later survive.

Breathing problems are one of the biggest health challenges for premature babies.

About 15 to 20 years ago, almost all babies who were born at 30 weeks or earlier were intubated and placed on a mechanical ventilator to assist in breathing. While effective, this invasive procedure carries risks, such as infections and greater risk of chronic lung disease. Today, neonatologists have moved away from routinely intubating premature babies and more often use noninvasive breathing assistance to improve babies' lung function.

Noninvasive ventilation includes continuous positive airway pressure (CPAP), which is when a small tube is placed in the baby's nose that provides air to the baby. The air pressure from the CPAP helps keep the baby’s lungs inflated, which means the baby does not have to work as hard.

"Trials across the country have shown that noninvasive ventilation is effective in helping babies whose lungs are not strong enough to breathe on their own," says Patel. "Mechanical ventilation still has its place for some babies, but it is an invasive procedure that does not need to be used on all babies."

An emphasis on breastfeeding

"Our goal is put as little stress on the baby as possible, so we used to only feed premature babies intravenously for the first week or two," says Patel. "But studies have found that feeding a premature baby breast milk soon after birth is safe and important for decreasing complications and improving long-term development, even if they only get a few drops the first day."

According to a study by researchers at Rush, feeding human breast milk to very low birth weight babies — babies who weigh less than 3 pounds, 4 ounces at birth — greatly reduces their risk of sepsis and lowers associated NICU costs.

"There are many different components in breast milk that are beneficial to premature babies," says Patel. "There are components that can encourage growth and maturation of the newborn's gut to help with digestion. There are also proteins, sugars and antibodies in breast milk that can help babies fight bacteria that may lead to infection, one of the biggest risks for premature babies."

The challenge, however, is that often mothers of premature babies struggle to produce milk. The Rush Mothers' Milk Club provides breastfeeding support, lactation counseling and peer counseling from mothers who have been through similar experiences.

"We do everything we can to help mothers overcome all of the challenges of producing breast milk," says Patel. "These mothers are usually completely dependent on pumping, so we offer them hospital-grade breast pumps, which help them produce more milk than standard pumps."

Sometimes, despite their best efforts, mothers are simply unable to produce the amount of breast milk their babies need. The Rush Mothers' Milk Club ensures that these babies are still able to reap the benefits of breast milk through donated pasteurized breast milk.

The care team for treating premature babies has also evolved through the years. "Parents are not just handing their baby over to us; they are deeply involved in the care of and medical decisions for their babies," says Patel. "We believe in family-centered care."

"Skin-to-skin is used throughout the world, and has been shown to improve babies' heart rate and breathing pattern, along with temperature regulation and neurodevelopment," says Patel. "Skin-to-skin also helps mothers produce milk."

Studies have found that feeding a premature baby breast milk soon after birth is safe and important for decreasing complications and improving long-term development, even if they only get a few drops the first day.

Another important factor in increasing survival rates of premature babies is the facility that cares for the baby. A recent study published in Pediatrics found that babies born in high-tech hospitals with high-volume NICUs, like the NICU at Rush, have better chances of survival than those born in hospitals without such facilities.

The state-of-the-art Renée Schine Crown Neonatal Intensive Care Unit at Rush is adjacent to labor and delivery, allowing a team of neonatal intensive care specialists to care for babies in distress within seconds after delivery.

"The first few moments of a premature baby's life are critical," says Patel. "Having the NICU so close to labor and delivery allows us to provide babies with the care they need immediately after they are born."

The NICU has individual patient rooms, providing privacy to the families and a quiet, healing environment for babies. "Having individual rooms allows for more bonding time between families and babies," says Patel. "Further, the quiet rooms are important for premature babies because constant noise and stimulation can be an added stress on the baby."

Over the past 20 to 30 years, there has been a tremendous improvement in prenatal care and increasing awareness about preterm delivery, which has led to fewer preterm births, according to Patel.

While the causes of many premature births are unknown, others are the result of maternal health problems or abnormalities. Prenatal care at the beginning of a pregnancy can help prevent preterm birth by allowing physicians to address maternal health concerns and risk factors before they lead to serious complications.

"Good prenatal care with an obstetrician who can identify problems early on can make a big difference," says Patel.

Find a neonatologist Request an appointment

Aloka Patel, MD, is an assistant professor of pediatrics and an attending neonatologist at Rush University Medical Center in Chicago,...
Watch Now

Why breast milk is best for babies, and is good for moms, too.
Read More

While many women praise the benefits of midlife parenthood, conception and pregnancy can prove challenging for older women.

A high-risk obstetrician at Rush, talks about how he helps his patients navigate pregnancy after a miscarriage.