Lou Orzech’s warehouse had always been loud, but that wasn’t always a problem. About 18 years ago, he started noticing that he couldn’t hear his employees over all the background noise. The problem got steadily worse, making it harder for the Shorewood, Illinois, resident to run his business.

At first he tried hearing aids, but after a while they weren’t enough. Looking for more help, Lou visited Elias Michaelides, MD, an ear, nose and throat (ENT) specialist at Rush University Medical Center.

“When we get to a point where hearing aids are seeming not to work very well, we do some very special hearing tests,” Michaelides says. “With those hearing tests, we try to test hearing in real-world situations with background sound with their hearing aids on. If their clarity with the hearing aids on is not very good, then they can be candidates for the cochlear implant.”

A cochlear implant is a small electronic device with two parts: One part is worn behind the ear to process sound, like a hearing aid. It communicates with the other part, which is surgically implanted in the middle ear, where it stimulates the cochlear nerves.

Michaelides told Lou he might fall into this category. Lou was intrigued but hesitant. Having surgery seemed like a big step. But Michaelides reassured him that there was little cause for concern by explaining what the procedure would entail.

“At Rush,” Michaelides says, “I think that we have a team of surgeons and other practitioners to ensure that the surgical procedure is smooth.” Rush’s ENT program is uniquely dedicated to providing care to patients after their procedures. Speech pathologists, audiologists, and psychologists assist patients in adjusting to their cochlear implants.

The right time to act

Then, last summer, Lou drove his son from Illinois to Florida for a college baseball summer league.

At the end of the summer, he went back to pick up his son. After just a couple of months away, his son noticed, it seemed much harder for Lou to hear him. That’s when Lou knew he had to do something.

He was feeling more and more like an observer instead of a participant in life: “You spend a great deal of your life wondering, ‘Am I really addressing what people are saying?’”

Lou scheduled his procedure for late 2021. Still, he worried it might come with risks, so he was glad Michaelides was there to explain that the procedure is usually uncomplicated. It takes about an hour to an hour and a half. It’s done under general anesthesia, which means the patient is asleep and doesn’t feel pain. And almost all patients go home the same day.

“We got to surgery day, and we got in and everything worked really well,” Lou says. “My wife was waiting for me in the waiting room, and Dr. Michaelides just came in and said, ‘I think this is really going to be amazing for him.’ And he was absolutely right. It has been a game changer.”

Hearing the world again, for the first time

Lou describes hearing the world with the aid of his cochlear implant as almost like hearing things for the first time.

Recently, waiting for water to boil as he cooked for his daughter, Lou heard a sound he didn’t recognize. “All of a sudden I heard little popping sounds,” he says. “I'm looking around going, ‘What is that noise?’ And eventually I realized what I was hearing was the water boiling. And that, to me, was an amazing thing. I’d forgotten water makes a noise when it boils.”

Lou only has one cochlear implant for now, but he’s eligible to get one for his other ear. And he says he “can't wait to get a second one. I can't even imagine what it's going to be like to hear in stereo.” 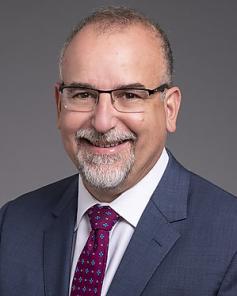 Skull Base Surgery at RUSH

Can Earbuds Cause Ear Infections?

The short answer is yes — but a few simple steps can usually...