As with most 2 year olds, it’s hard to get Daxton Carey to sit still. With boundless energy, Daxton is thoroughly enjoying being a toddler. And his parents, Cori Forsythe and Doug Carey, don’t take that for granted.

At 29 weeks of pregnancy, Cori and Doug faced an uncertain future for Daxton during an ultrasound when they learned he had tetralogy of Fallot. This serious congenital heart condition includes a combination of four heart defects: a hole between the left and right ventricles, narrowing of the valve and artery that connect to the lungs, thickened muscle in the right ventricle, and a misplaced aorta.

Once a baby with this condition is born, pediatric cardiologists need to make sure the baby’s oxygen levels are adequate, and pediatric cardiac surgeons would later need to perform an open-heart surgery to repair all four defects in order to help the baby’s heart work as normally as possible.

Detecting heart defects before birth is critical to giving babies like Daxton a chance to live full, healthy lives. “Outcomes for children with congenital heart conditions have drastically improved over the past couple of decades, thanks to improvements in diagnosing these conditions during pregnancy and advancements in treating babies after birth,” says Karim Diab, MD, the fetal and pediatric cardiologist at Rush who treated Daxton. “Today, most kids we diagnose before they are born have better outcomes — and many with congenital heart conditions can live normal lives well into adulthood.”

After the diagnosis, Cori and Doug met with a multidisciplinary team of specialists at Rush, which included a fetal cardiologist, a pediatric cardiac surgeon, a maternal-fetal medicine OB-GYN, neonatologists and others.

The team put a care plan in place and started preparing Cori and Doug for what to expect. “We had a couple meetings with our whole care team, and they drew everything going on with Daxton’s heart on a whiteboard,” says Cori. “They let us ask as many questions as we had and gave us their phone numbers for additional questions. We were scared and we knew this was really serious, but our team was excellent and gave us confidence that our baby would be ok.” 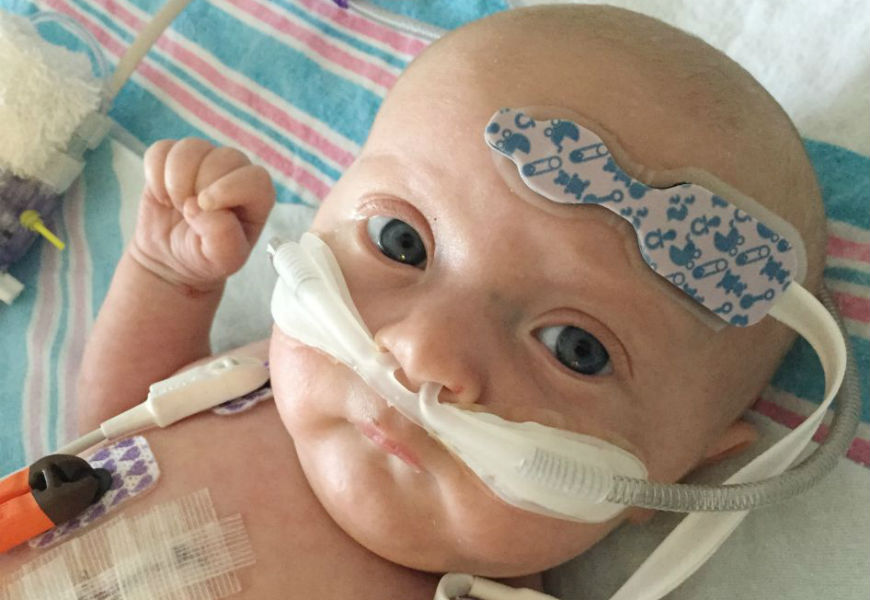 Daxton was born via a scheduled cesarean section at 34 weeks, and he immediately went to the neonatal intensive care unit (NICU). He was born at about 5 pounds, and his team determined they would wait to do surgery until he weighed 10 pounds, allowing Daxton to be bigger and stronger for open-heart surgery.

He spent four weeks in the NICU before heading home to gain weight for surgery. “The NICU team was amazing with helping us and caring for Daxton,” says Cori. “We would come to the NICU every day, but could also call anytime, day or night, to ask them questions about how Daxton was doing. They were also great with my older son, who was six at the time. They would take him to do crafts and other fun things while we were with Daxton in the NICU.”

Almost three months after he was born, Daxton underwent an eight-hour, open-heart surgery. The surgery repaired Daxton’s heart, allowing him to grow into a healthy little boy.

While Daxton is doing well, he will need lifelong care for his heart. “He’s had one stent replacement already and he’ll need at least one more as he grows,” says Cori. “He will also need a valve replacement when he’s a teenager. But after that, he should be good to go.”

Today, Cori and Doug are enjoying watching their son grow, explore and enjoy life. “Daxton’s doing great,” says Cori. “He’s a typical little toddler; he has so much energy and he’s fast. You would never know there was ever anything wrong with his heart.”

“Outcomes for children with congenital heart conditions have drastically improved over the past couple of decades, thanks to improvements in diagnosing these conditions during pregnancy and advancements in treating babies after birth.” – Karim Diab, MD, fetal and pediatric cardiologist