Thanks to one of the area’s few cardiac electrophysiologists, heart patients are being successfully treated for a common but potentially life-threatening condition close to home.

Sixty-three-year-old Jay Kleefisch of Somonauk was busy restoring a boat on Lake Holiday, which involved scuba diving to locate the anchor. On his way up to the surface, he felt an alarming sensation. As he describes it, “I thought my heart was beating out of my chest.” He went home and relaxed, expecting that a good night’s sleep would bring his racing heart back to a normal rate.

When Jay woke up the next morning, his heart rate was at 180. He knew something was seriously wrong and that he needed medical attention. So he wasted no time going to the nearest emergency department, where he was given a medication intravenously to get his heart rate under control. And it worked – for the time being.

After two weeks, his heart racing again, Jay was back in the emergency department. This time, after receiving another IV of medication to slow his heart rate, as well as blood thinners to prevent a stroke, he was referred to Edward Lipman, MD, a heart specialist at Rush Copley Medical Center.

As a cardiac electrophysiologist, Lipman is trained to diagnose and treat arrhythmias, or abnormal heart rhythms. So he focuses on the electrical impulses in the heart that control its rhythm and trigger heartbeats. In Jay’s case, Lipman concluded through a battery of diagnostic testing that he was experiencing atrial fibrillation, commonly known as Afib.

Afib is the most common chronic arrhythmia – when the heart “quivers” in the top chambers of the heart, called the atria. This happens because the atria aren’t moving blood properly, so blood pools and gets stuck in the grooves of the heart. This, in turn, may cause blood clots to form, which could get pumped to the brain and cause a stroke. “When this condition is left unchecked, a patient is at five times the risk of suffering a stroke,” Lipman explains.

For many people, a procedure called electrical cardioversion can be used to reset the heart’s rhythm, followed by daily medications to control it. But even if it is controlled, it requires careful monitoring. Also, over time, this treatment is only partially effective, reducing Afib episodes by only about half.

Ultimately, if a patient’s Afib cannot be controlled by medications, a minimally invasive procedure called “cardiac ablation” is most often recommended, which carries the possibility of eliminating a patient’s Afib episodes for life.

Lipman performs two main types of ablation at Rush Copley. One type is called radiofrequency ablation, or RFA. In this procedure, the surgeon inserts a catheter through a blood vessel and into the heart. A sensor in the tip of the catheter applies heat to electrically “wall off” certain pulmonary veins where the main triggers for Afib have been found to originate.

The other type of ablation, called cryoablation, involves the insertion of a balloon catheter that is threaded through the body and into the heart. Once the balloon reaches the site of the abnormal cells, it is inflated with a special coolant to freeze the damaged tissue that is triggering the Afib.

For an initial ablation procedure, Lipman most often uses cryoablation to treat his Afib patients, including Jay. “The argument for cryoablation is that it’s quicker,with less pain and fewer complications than with an RFA procedure. The vast majority of my patients go home the same day,” according to Lipman, who also noted, “The success rate is about 5% better than with an RFA.”

Jay describes how Lipman explained the procedure in detail and what to expect afterward: “He treated me like a member of his family. He didn’t sugarcoat it, but he made me feel comfortable about the surgery. And it all happened the way he said it would, including my recovery. I just can’t sing his praises loud enough.”

Jay’s procedure was successful and his recovery went smoothly — two weeks of taking it easy at home, followed by a return to work a week later. He also took blood thinners for two months following the ablation and has gone for check-ups every six months.

Best of all, a year-and-a-half after his procedure, Jay has experienced no recurrences of Afib or any complications. In fact, the complication rate among Lipman’s patients is exceptionally low, at just 1%.

Asked what accounts for such a low percentage, Lipman explains, “I’m very cautious and very thorough. I take my time. And I have an experienced medical team who has worked with me for years.”

But he also noted that Afib is only part of the solution. Sometimes other issues need to be considered that can affect the outcome of a procedure, including a patient’s weight, uncontrolled blood pressure, heart failure, kidney problems, or even an allergy to the contrast dye used in the procedure.

As with most patients, Jay wasn’t alone in dealing with his condition. His wife, Gerilyn, was by his side throughout the process, and she credits Lipman’s expertise for resolving her husband’s problem. “He’s wonderful, and I thank him for saving my husband’s life,” she says. “I would recommend him to anybody.”

Edward Lipman, MD, was the first full-time electrophysiologist in the Fox Valley area, and has been in practice at Rush Copley Cardiovascular for more than 16 years, using leading-edge techniques to treat arrhythmias. 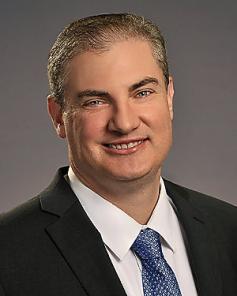