Black children have significantly higher rates of shellfish and fish allergies than white children, indicating that race plays an important role in how children are affected by food allergies, researchers at Rush University Medical Center have found. Results of the study were published online on Jan. 19 and in the February issue of the Journal of Allergy and Clinical Immunology: In Practice.

“Food allergy is a common condition in the U.S., and we know from our previous research that there are important differences between African-American and white children with food allergy, but there is so much we need to know to be able to help our patients from minority groups,” said Dr. Mahboobeh Mahdavinia, who is lead author of the study and chief of the Division of Allergy and Immunology at the Medical Center.

“In this current paper, our goal was to understand whether children from different races are allergic to similar foods, or if there is a difference based on their racial background,” Mahdavinia said.

Food allergy is major public health concern, affecting 8% of children in the United States, with an estimated economic burden of $24.8 billion annually. In people with food allergies, a tiny amount of food can trigger signs and symptoms such as hives, breathing and digestive problems or anaphylaxis (a severe, potentially fatal allergic reaction).

“National surveys have shown that the prevalence of food allergy in general has been increasing in children in the U.S. among all races, but much remains unknown about why certain allergies are more likely to affect children of particular races and ethnicities and how those minority patients are affected,” Mahdavinia said.

She and her colleagues conducted a large study of children ranging in age from birth to 12 years old who were diagnosed with food allergy and were seen in allergy/immunology clinics at four urban tertiary care centers in the U.S., which included Rush University Medical Center, Ann & Robert H. Lurie Children’s Hospital of Chicago, Cincinnati Children’s Hospital Medical Center and Children’s National Hospital, located in Washington, D.C. The study included 664 children and was composed of 36% Black and 64% non-Hispanic white children.

The study found that the Black children were more likely to have an allergy to shellfish and fin fish, plus higher odds of having a wheat allergy, compared to the non-Hispanic white children. Researchers suspect that shellfish allergy may occur from inhaling tropomyosin, the protein of two common household allergens, dust mite and cockroach, which share 80% of amino acid sequencing with shellfish.

Previous studies indicate that cockroach exposure may be an important mechanism by which children develop a shellfish allergy. For example, higher levels of cockroach allergen have been found in lower socioeconomic, inner-city neighborhoods where many Black children live and previous data show that the immune system can confuse certain proteins in seafood with similar proteins that are present in the muscles of cockroaches that commonly elicit an allergic response. Tropomyosin, which regulates muscle contraction and relaxation, also has been found in fin fish.

While scientists are still trying to figure out the exact mechanism of the allergy, the findings provide further insight into the importance of reducing Black children’s exposure to cockroaches.

“This information can help us care for not only a child’s food allergy, but all of their allergic diseases, including asthma, allergic rhinitis and atopic dermatitis,” said Susan Fox, PA-C, MMS, who is a co-author of the study and an allergy and immunology physician assistant at Rush University Medical Center.

“A major concern is that there is a higher prevalence of asthma in African-American children with food allergies when compared with white children with food allergies. Approximately 70% of fatal food anaphylaxis is accompanied by asthma. African-American children are at a two- to threefold risk of fatal anaphylaxis compared to white children,” Mahdavinia said. “By knowing this information, it can identify are most at risk patients.

“We need to conduct further research to identify food allergies and food sensitivities among all races and ethnicities so we can develop culturally-sensitive and effective educational programs to improve food allergy outcomes for all children,” Mahdavinia added.

Dr. Mary C. Tobin and Susan Fox PA, allergists at Rush, also are among the co-authors of the study.

The study was funded by the National Institutes of Health. 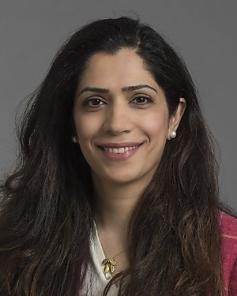 Myths and Facts About Food Allergies

Younger patients with COVID-19 who also had asthma need...