Prostate cancer affects one in every eight men during their lifetime, making it the most prevalent form of cancer for males. For many, the standard of care means facing aggressive treatments that include radiation and the freezing or removal of the entire prostate, which often result in incontinence and erectile dysfunction. But at RUSH, a new treatment for some types of prostate cancer offers hope for those looking to avoid punishing side effects.

“We were about 50 years behind breast malignancy treatment,” said Srinivas Vourganti, MD, a urologist at Rush University Medical Center. “In breast cancer, you often excise the cancer while leaving the healthy tissue, but we weren’t able to do that.”

Men with early-stage or lower-risk prostate cancer could take a “watch and wait” strategy, in which the cancer is monitored regularly but no immediate interventions are made to avoid more aggressive methods. This leaves patients with the choice between waiting and taking aggressive steps.

“A lot of guys want a middle ground between those two options,” Vourganti said. “We’re really excited that we potentially have another option for some cases.”

That “middle ground” is a new treatment at RUSH using the NanoKnife, a tool for use in irreversible electroporation, or IRE. The technique uses electricity to destroy cancer cells while leaving surrounding healthy tissue and nerves unharmed, making it a good option for patients with low or intermediate-risk prostate cancer.

Vourganti recently used the technique with one of his patients, John, who was diagnosed with prostate cancer in February 2021. John, who asked to be referred to only by his first name, said that when he was diagnosed, Vourganti explained all of his options, including using the NanoKnife. Though the method is still considered experimental, John thought this was preferable, since he wanted to prevent the side effects that often come with other types of prostate cancer treatment.

“It seemed like a good option primarily because of the collateral damage that the other things could do,” John said. “He said it’s a new field, it’s experimental, but to prevent damage to the nerves, it was a good way to start.”

The NanoKnife has four small probes that are inserted into the tumor and guided by ultrasound and magnetic resonance imaging (MRI). The probes pass electricity in a manner that targets only the cancer cells, leaving nearby healthy tissue and cells alone. The technique also spares harm to the nerves within the prostate related to erections and bladder control, potentially preserving urinary and erectile function.

The procedure takes place under general anesthesia to ensure patients remain immobile. Patients recover at home, where they need to use a urinary catheter for three days after the procedure.

John underwent the procedure in July 2021, and it successfully destroyed the cancer in his prostate. Both the IRE and recovery, he said, were uneventful, aside from three days of discomfort with the catheter. John had an MRI and biopsy in October, which showed no evidence of any cancer recurrence. He will receive another MRI, as well as a blood test, in May to check on his recovery, and thus far he reports that he has experienced no urinary or sexual side effects from the procedure.

“Because there were no side effects, I’m already back in a normal routine,” John said. “So that’s the whole point. It’s status quo. I asked Dr. Vourganti after the surgery, ‘Are there any restrictions?’ And he laughed. He said, ‘There’s no restrictions.’”

It’s important to note that 15% to 20% of prostate cancers return after initial treatment, Vourganti said. If the cancer does return after the IRE procedure, he added, patients still have more aggressive forms of treatment available to them.

“We don’t know if it’s going to work for everybody,” Vourganti said. “But it could give many men an appropriate form of control. And if it comes back, we have more options. So, we’re really excited about that.”

A clinical trial to study the use of the NanoKnife procedure for prostate cancer is enrolling patients at Rush and the Mayo Clinic. Other clinical studies are underway to evaluate the effectiveness of NanoKnife in treating advanced pancreatic cancer.

John said he’s happy with the choice he made after consulting with Vourganti, and he highlighted Vourganti’s commitment to finding more options for people with prostate cancer.

“He’s passionate about what he’s trying to do here,” John said. “He believes it’s a good option to try before some of the more extreme measures, to help people. It doesn’t mean it’s not going to come back. But it’s all relative, you know? I just move with the flow. We’ve got to get something done. Let’s make the best decisions we can with the options we have.” 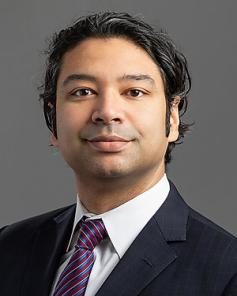