On Labor Day weekend in 2019, I had planned a short hike with a friend to see a waterfall in Steamboat Springs, Colorado. But I had to cut our trek short because of burning, gnawing pain in my groin that radiated around my right hip and down the front of my thigh — the same kind of pain I’d been having off and on for a year.

Embarrassed, I apologized to my friend as I limped back to her car, blaming my pain on what I thought was a stubborn workout injury. I resolved to find an answer when I returned home to Chicago.

To the outside world, I seemed strong and fit. I lifted weights with a personal trainer twice a week and rode my Peloton bike regularly. I was a healthy weight, and I didn’t smoke. My chronic pain was mostly invisible, except when I had to admit to others that I was in too much agony to walk, climb stairs or stand for too long — activities that most people my age could do painlessly.

For the next year, while I searched for an answer, my chronic hip pain was sometimes so intense that it would make me double over and cry. Occasionally, I felt something in my hip “lock up” when I walked. The aching was especially intense at night, leaving me weak and exhausted the next day. I tried over-the-counter pain medicine, physical therapy and steroid injections in my hip and spine. Nothing helped.

In November 2020, I had a magnetic resonance imaging, or MRI, test that provided a shocking diagnosis: I had end-stage osteoarthritis at age 49.

I had bone spurs and bits of broken bone and cartilage floating around in my hip. The cartilage that was supposed to serve as the cushion between the ball and socket of my hip was nearly obliterated, and the friction from my bones rubbing together was causing cysts in my hip socket. If I wanted to be free from pain, I had two options: get a hip replacement now, or get one later.

As a health care writer, I do a lot of research. So that’s what I did to make my decision.

I found out that a growing number of people in their 40s and 50s are choosing to have hip replacements, according to the National Center for Health Statistics. And because of less invasive, muscle-sparing surgical techniques as well as advances in anesthesia, recovering from a hip replacement is much quicker than it used to be. At the same time, today’s more durable implants mean that artificial hips last longer than ever.

These facts, along with my chronic pain, convinced me that I shouldn’t wait.

After I met with four hip surgeons at different hospitals in the Chicago area, Rush became my top choice.

I had worked in communications at Rush in the 1990s, so I knew it was one of best orthopedic hospitals in the U.S. I chose my surgeon, Denis Nam, MD, MSc, because he had an excellent reputation and belonged to select group of surgeons in the country offering robotic-assisted hip replacement.

Robotic surgery appealed to me for several reasons. Studies have shown that using robotic technology leads to more accurate placement of a new joint and is less likely to cause a leg length discrepancy after surgery. This was especially important to me because I’ve had a curved spine from scoliosis since I was a teenager, and I didn’t want uneven legs to create more back problems for me.

Robotic surgery has also been associated with a lower risk for dislocation. And at Rush, I could go home the same day after robotic surgery — a huge plus for me because I was opting to have my hip replaced during the COVID-19 pandemic.

Dr. Nam was also the first doctor to explain why I had such a bad hip at a relatively young age: hypermobility. I’ve always been extremely flexible, which had been an advantage in activities like yoga. But over time, hypermobility can damage joints and lead to early osteoarthritis.

At 7 a.m., I received spinal anesthesia with sedation, and the last thing I remember was being wheeled into the operating room. At 8:20 a.m., Dr. Nam called my husband, Manny, to let him know the surgery went smoothly. Later that morning, Dr. Nam and members of his team visited me in recovery. Soon after, I was walking around the recovery room with crutches, feeling more weakness and fatigue than actual pain. I had occupational therapy and PT around lunchtime. That afternoon, Manny drove us back home to Lake Bluff, Illinois, and I was able to walk up the stairs into our house with crutches.

The next day, I started at-home PT and had a visit from a home health nurse. The PT and nurse visits continued for the next two weeks. Then, I started outpatient PT at a facility close to home.

During my recovery, I was surprised that I didn’t feel as much pain as I had anticipated. In fact, five days after my surgery, I was taking only Tylenol and an anti-inflammatory drug for mild discomfort and moderate swelling. I also didn’t feel like I had something metal or foreign in my body. My artificial joint felt like a natural hip that would become stronger over time.

About three weeks after getting a total hip replacement, I was able to walk on my own without a crutch or cane and drive myself to PT. Four weeks after surgery, I took a 1.67-mile walk to my favorite coffee shop.

Looking back on my journey so far, I believe the most difficult parts were accepting my diagnosis and making the choice to have a hip replacement at 49. But I’m glad I did it. And I’m grateful to Dr. Nam and his team at Rush for relieving my arthritis pain so I can continue to be active and engaged during what I hope are many healthy decades to come.

Laura Hegwer is a freelance health care writer based in Lake Bluff, Illinois. She has more than 25 years of experience writing for patients, physicians and health care executives. 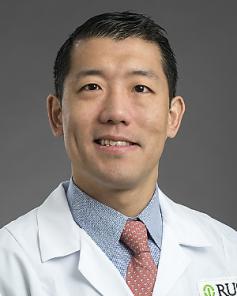