Janet Cunning was fine one day — and then she definitely was not.

In 2018, the 45-year-old Chebanse, Illinois, resident, who works for the Federal Transportation Security Administration at O’Hare International Airport, experienced a terrifying series of health calamities, including a stroke.

But a procedure called a PFO closure, performed at Rush University Medical Center in January 2019 to close an opening in her heart, has allowed Cunning to head off the likelihood of a second stroke and concentrate on her overall health.

A patent foramen ovale (PFO) is an opening between the two upper chambers of the heart that didn’t close after birth, as it normally would. About one quarter of people have a PFO, though most of them never need treatment for it. Cunning only discovered that she had a PFO in August 2017, after having an echocardiogram during a doctor’s visit to explore some minor chest pain. “My doctor explained to me that I had a PFO, what it was, how common they are and the vast majority of them require no treatment,” she says.

Unfortunately for Cunning, in September 2018, that was no longer the case. She developed a blood clot, or deep vein thrombosis, in her leg, which traveled to her lungs and caused a pulmonary embolism. Her doctors suspect that part of the clot in her leg found its way through the PFO and up to her brain, where it caused her to suffer a stroke.

“I started feeling a bit tired, and it was difficult to take a deep breath,” Cunning says. She scheduled an appointment to see her doctor in a couple days, not realizing the severity of her symptoms. But a day later, suddenly unable to breath, she was rushed by ambulance to the hospital.

The stroke occurred while she was in the intensive care unit at Riverside Medical Center in Kankakee, near her home, in respiratory distress from the clots, waiting for a blood transfusion — Cunning has a very rare blood type — that doctors hoped would bring her hemoglobin level up enough to allow her to undergo treatment for the blood clots. Cunning says her doctors still aren’t sure what caused the clots.

After the stroke, Cunning was airlifted to Rush University Medical Center and treated there. “It was pretty surreal, everything happened so fast," she says. “Looking back, I refer to it as a series of unfortunate events: One issue led to another, and so on."

Cunning has recovered remarkably well from the stroke, and soon after it occurred, her doctors began talking with her about having a PFO closure.

She was a good candidate for the procedure because the PFO was so likely to have played a role in her stroke, says interventional cardiologist Clifford Kavinsky, MD, PhD, who performed the PFO closure. Cunning was young to have a stroke, and she hadn’t had symptoms of any of the typical conditions that might have caused it, like an irregular heartbeat. Kavinsky says it can be difficult to demonstrate that a PFO is responsible for any particular stroke, but in Cunning’s case, all signs pointed that way.

“She had a blood clot in a vein in her leg. Ordinarily, you would not expect that to cause a stroke,” says Kavinsky, who has been working with PFO closure technology for 18 years, and has performed more than 200 of the procedures. “Part of the clot might go to the lungs, but how did it get to the left side of her heart? The reasoning was that the clot traveled through the PFO.”

If that was the case, as long as the hole stayed open, that pathway remained and Cunning was at risk of another stroke.

In a PFO closure, a catheter is inserted into a large vein through a small incision made in the inner thigh (groin) area and then is advanced up into the heart, where it’s used to insert a permanent device that stops the flow of blood across the heart's upper chambers.

“I’m the type that likes to read and research, and know what’s going on,” Cunning says. “Because of the turmoil I went through, and the ordeal of the stroke, it was scary. I was very apprehensive at the idea of having something placed in my heart. At the same time, I knew I was at higher risk of another stroke.”

But Kavinsky and the rest of the Rush team put her at ease. She stayed only one night at Rush after the procedure, for observation. Since the PFO closure, she has had some restrictions on exerting herself, but “no major discomfort.”

The link between PFO and stroke

While strokes are common in old age, when the arteries in the brain tend to narrow, they’re rare in people younger than 60. Then, strokes may stem from a genetic disorder, or some other condition. “However, we’re beginning to understand that about half of strokes in younger people have to do with a PFO," says Kavinsky. “In those people, PFO closure has been shown to reduce the likelihood of a second stroke.”

Rush is a center of excellence for the procedure. In 2016, the Federal Food and Drug Administration approved the use of the Amplatzer PFO occluder, the device Kavinsky installed in Janet Cunning’s heart. Rush and Kavinsky, who does a number of other cardiac procedures as well, were involved from the beginning in the clinical trials that proved the safety and efficacy of the new technology, as well as the trials that led to FDA approval of another device sometimes used in PFO closure, the Gore Cardioform septal occluder.

“We have one of the most comprehensive interventional cardiology programs in the country, and one of the few fellowship training programs for practitioners in that field,” Kavinsky says. His department partners with pediatric cardiologists as well.

In the past, medication was prescribed to address the threat of a stroke in vulnerable patients with PFO, but Kavinsky says four studies have shown the closure procedure to be more effective than medication.

“In the appropriate patient, like Janet Cunning, PFO closure dramatically reduces the rate of recurrent strokes,” Kavinsky says. “It’s another effective tool in our arsenal, and at Rush we will continue our efforts to refine and expand the use of this life-saving technology.” 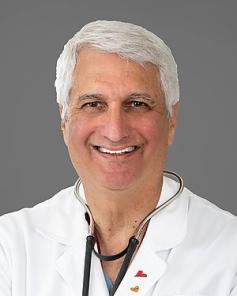