RUSH University is saddened to share the news of the passing of Kathleen "Kay" Gainor Andreoli, DSN, RN, FAAN, dean emeritus of the College of Nursing. Andreoli served as the nursing college’s dean for 18 years before retiring in 2005.

Andreoli joined RUSH in 1987, when she was appointed dean of the RUSH University College of Nursing and vice president for nursing affairs at Rush-Presbyterian-St. Luke’s Medical Center (as RUSH University Medical Center was known then). She held the latter position until 2002, when Andreoli became vice president of academic nursing affairs. She oversaw the creation of the Doctor of Nursing Practice (DNP) program, making RUSH the second institution to offer the degree and establishing two endowed chairs in nursing.

She was passionate about the advancement of nursing and was dedicated to ensuring that students received cutting-edge nursing education that would prepare them for their careers. More than 3,000 nursing students graduated from RUSH during her tenure.

Her parting gift to the College of Nursing was the creation of the “Centuries of Excellence: Portraits of Nursing Alumni," which still hang in the CON offices today The College held a ribbon-cutting ceremony for the display, during which the Rush-Presbyterian-St. Luke’s Nurses Alumni Association named her an honorary alumna.

Andreoli’s impressive tenure as dean and her dedication to Rush’s nursing students inspired her friends and colleagues in CON to establish a scholarship fund in her honor. The Kathleen Gainor Andreoli, DSN, RN, FAAN, Endowed Scholarship Fund awards between $2,000 and $2,500 to students annually and assists students enrolled in any of the College of Nursing programs, wherever the need is most profound.

"Dean Andreoli left an indelible mark on the College of Nursing," says Christine Kennedy, PhD, RN, FAAN, John L. & Helen Kellogg Dean. "It is because of her dedication to the advancement of nursing education that RUSH is known today as one of the top nursing institutions in the country, as she shepherded the development of the DNP program. We are profoundly grateful to Dean Andreoli for her unwavering commitment to the students and faculty of the College. Her passing is a great sadness for the faculty and alumni with whom she worked."

Andreoli was born in Albany, New York, and received her baccalaureate from Georgetown University, a master’s degree from Vanderbilt University and a doctorate from the University of Alabama in Birmingham. 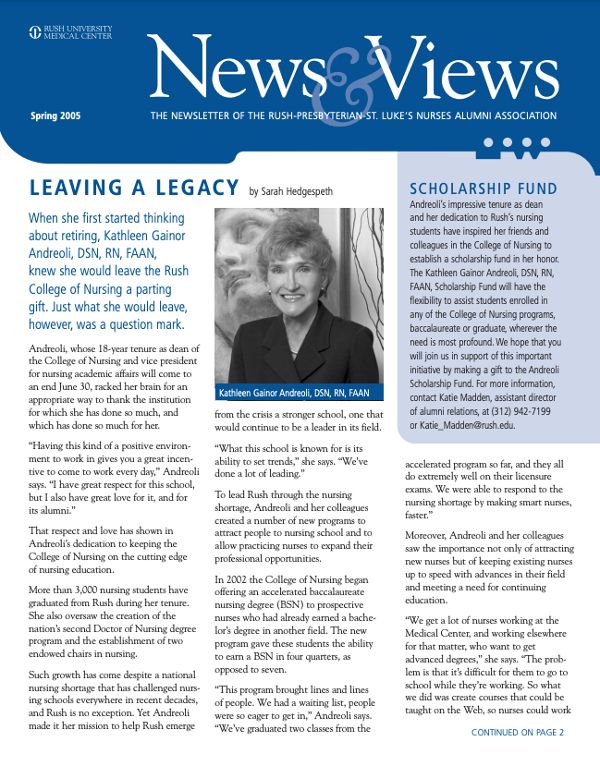 In 1965 she was recruited by Eugene A. Stead, Jr., MD — the founder of the physician assistant (PA) profession — to join a team at Duke University to help develop the first curriculum used in the United States to formally educate PAs. After leaving Duke in 1970, she helped establish and served as the educational director of the first PA program in Alabama at the University of Alabama at Birmingham. In 1980 she joined the President’s Office at the University of Texas Health Science Center at Houston, where she created and became vice president of the Office of Educational Services, Interprofessional Education and International Programs.

She was made an honorary PA of the Duke Physician Assistant Program and received distinguished alumni awards from both Vanderbilt University and the University of Alabama at Birmingham. Andreoli also received the Henry Betts, MD, Award for disability rights and employment advocacy from the Rehabilitation Institute of Chicago on behalf of the RUSH College of Nursing in 2004.

You can learn more about Andreoli and her lasting legacy at RUSH University in the spring 2005 issue of News & Views, and in this biography on the Physician Assistant History Society website.

In lieu of flowers, the family requests that donations be made to support the Kathleen Gainor Andreoli, DSN, RN, FAAN, Endowed Scholarship Fund. Please send memorial checks, made out to "Rush University Medical Center" to the RUSH Office of Philanthropy, 28057 Network Place, Chicago, IL 60673-1280 or make a tribute gift online.

Runs in the Family