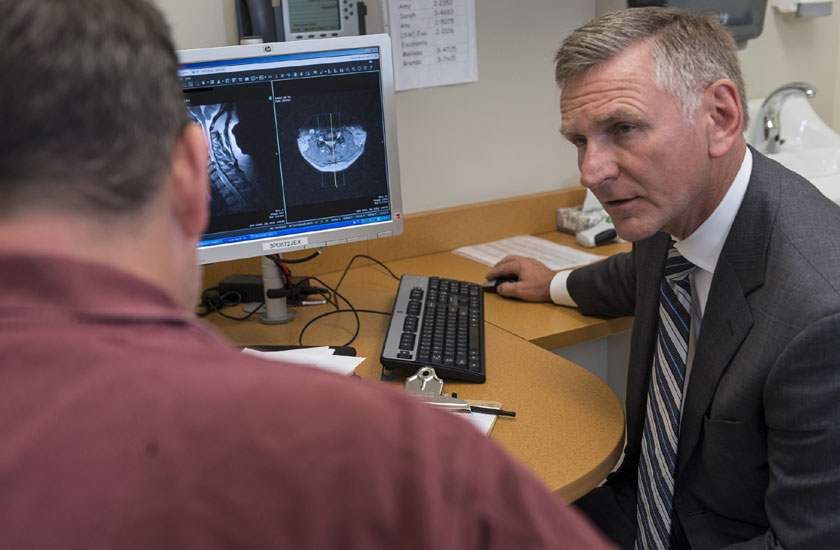 Four of six people with paralyzing spinal cord injuries who were treated with a new cell therapy have recovered a significant level of movement on at least one side, new study results show.

This 67 percent recovery rate is more than double the rates of recovery seen in both matched historical controls and published data in a similar population. Each of the six participants in the study had lost all motor function below the location of the spinal injury.

They each received a surgical injection of 10 million of the cells being studied. Asterias Biotherapeutics, the biotechnology company that manufactures the cell therapy, reported the 12-month results of the study Oct. 2.

‘Vastly better than anything we’ve ever seen before’

“Having worked on this research for more than 20 years, and given that we hadn’t seen any significant improvement before, these results are beyond anything I would have hoped for in the study,” said Dr. Richard G. Fessler, professor in the Department of Neurological Surgery at Rush University Medical Center in Chicago.

Fessler is the lead investigator of the study of nerve cells known as oligodendrocyte progenitor cells, or AST-OPC1, which potentially can make poorly working nerves function better. Rush is one of nine centers in the U.S. currently studying this new approach to evaluate safety and efficacy of AST-OPC1 treatment.

“Normally with a spinal cord injury, a person will improve for a month or two, but that’s it. We are 12 months out and we are continuing to see improvements in patients who receive the treatment. That’s vastly better than anything we’ve ever seen before,” Fessler said.

“This is a meaningful improvement for a patient who is paralyzed in the neck. The patient goes from not being able to use his or her arms or hands, to being able to perform normal functions such as eating, writing/typing, all of the things we do with our hands every day.”

More than 17,000 people in the United States suffer a severe, debilitating spinal cord injury each year. These injuries can be devastating to quality of life and ability to function independently.

“Before my stem cell injection, I couldn’t move my left arm or my left hand,” said Christopher Block, who was injured in an accident in July 2016 that left him paralyzed from the neck down.

“And, I could only move my right arm up to approximately my shoulders. I couldn’t put on my clothes or feed myself.”

These injected cells were derived from human embryonic stem cells. They work by supporting the proper functioning of nerve cells, potentially helping to restore the conductivity of signals from the brain to the upper extremities (hands, arms, fingers) in a recently damaged spinal cord.

“Not being able to feel your chest and the temperature of water, regaining that feeling is like being reborn. It’s amazing.”

“Our target for the entire study since its commencement was that at 12 months 45-50 percent of study subjects would recover at least two motor levels on at least one side, and it is exciting that it has exceeded this target recovery rate,” said Dr. Edward D. Wirth III, chief medical director of Asterias.

The trial involves testing three escalating doses of AST-OPC1 in as many as 35 patients with subacute, neurologically complete injury to the cervical spinal cord — that is, the spinal cord in the neck (specifically, the spinal nerves known as C4 to C7). These individuals essentially have lost all sensation and movement below their injury site and have severe paralysis of the upper and lower limbs.

AST-OPC1 is being administered 21 to 42 days post-injury. Patients are being followed by neurological exams and imaging procedures to assess the safety and activity of the treatment.

For this therapy to work, the spinal cord has to be in continuity and not completely severed. Patients must be able to start the treatment within 25 days of their injury.

The study is funded by Asterias Biotherapeutics, which developed the AST-OPC1 treatment used in the study, and also in part by a $14.3 million grant from the California Institute for Regenerative Medicine.