Medical Student Takes on the Persisting COVID-19 Crisis in India

As COVID infection in India reaches 28.5 million cases, Aparna Nutakki is raising $15,000 to provide medical beds in regions with the greatest need
By Gema Tinoco

With the U.S. surpassing 300 million COVID-19 vaccine shots on June 6, a return to normalcy is suggested across the country. But while half of the eligible population can now celebrate being fully vaccinated, Aparna Nutakki, a fourth-year student at Rush Medical College, confronts the health crisis that is being presented by COVID-19 in India. Currently, India has one of the highest number of active cases of infections in the world, second only to the U.S. Working alongside Project C.U.R.E., the world’s largest distributor of medical donations to developing countries, Nutakki is aiming to send $15,000 worth of medical beds to the NTR Health Trust for their distribution to India’s most in-need regions.

Nutakki’s affinity for global health was inspired by the first eight years of her life growing up in Hyderabad, the capital of southern India’s state of Telangana. Prior to medical school, she returned to India for a year and a half to do public health work. Now as a Rush University medical student, she’s found her “sweet spot” at the intersections of neurology, research, and global health, and is looking forward to applying for residency. 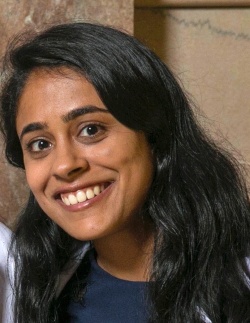 Between her second and third year of medical school, Nutakki had the opportunity to experience working for global health conducting research in Zambia, a country in the sub-Saharan region of Africa. Upon returning to the U.S. at the beginning of 2020, Zambia’s COVID-19 cases peaked, bringing her to question how she could make a difference. Considering sending a container of medical supplies, she had Project C.U.R.E. in mind, referred to her by physicians at Rush who work with the organization.

“There was so much happening at that time. Between the U.S. being low in supplies, transitioning back to med school, and trying to find a person in Zambia to work with me while COVID-19 cases were on the rise, I thought, ‘Alright, maybe I shouldn’t add on to somebody else's plate right now,’” Nutakki shared.

She decided to jump back into global health work a few weeks ago, she recalled, as news of the dire situation in India was circulating more and more through her family and friends. “People were lying outside on the pavement, unable to get care. It reminded me of when COVID-19 first hit the U.S. last spring, but this was much worse because of resource limitations. It kind of started off as, ‘What can I do? What can I do within my capabilities?’”

To date, Nutakki has raised over $13,000 in the first fundraiser she has ever independently organized to send 60 medical beds to India in collaboration with Project C.U.R.E. Reflecting on the process of raising the funds in the span of a month, she shared the lows and highs that have made the experience so personal.

“I’ve never done fundraising before, and I have newfound respect for anyone who works in this field. It’s such a rollercoaster of emotions because when someone donates to your cause, you think, ‘Yes! We're doing something!’ And then when there’s a lull in donations, you begin to wonder, ‘Oh my god, what’s happening? Am I going to meet my goal?’ But then you start to realize that you’ve put your feelers out, made your case and people are going to get to it. People are empathetic, they’re sensitive to what’s happening, it’s just that everyone is on their own schedule.”

India’s battle with its second wave of coronavirus infections began in late April, reaching over 17.5 million cases on April 27 and jumping to over 20.2 million cases within a week. Today, it stands as the second most-impacted country with over 28.5 million cases. Nutakki highlighted the state of Karnataka currently having the highest active cases of infection, explaining how the many moving parts to the fundraiser have included a process of evaluating where and how she could maximize its mission.

The impact on India has especially been exacerbated by the shortages in medical resources, especially medical beds and oxygen supplies. Nutakki is among the everyday individuals across the U.S. and world who are bringing awareness to the issue and mobilizing communities to make a difference, but she also emphasized her meaningful sources of inspiration have ranged in shapes and sizes.

“This fundraiser is my way of doing things, but I think everybody has their own way of doing things. So many of my classmates are doing awareness events and trying to work in their local communities. I’m constantly inspired by other med students and other people, who aredoing what they can. I think that’s one of the first strokes of inspirations for me.”

In deciding to leave her own mark in global health, Nutakki emphasized the need to be all-in on addressing the pandemic’s threat, worldwide.

“The media is covering it less, from what we see, because India’s not here, it’s not in our immediate thoughts. We almost have to make an extra effort to understand that this is still happening, it’s not over.”

“We’re all in it together and this is something I remind myself of everyday. Not just with COVID-19, but with any humanitarian crisis that arises. It’s bigger than each of us individually and it’s a larger global thing that needs to be addressed.”

With the hopes of raising the $15,000, Nutakki aims to get the supplies to India before July so she can take advantage of the Indian government’s temporary waiver on port charges for medical supplies through the end of June.

Nutakki expressed her gratitude to all who have helped her reach over 80% of her goal so far, and especially reflected on the theme that empathy has played throughout her efforts.

It’s been really inspiring, motivating and heartwarming to see so many people care. Especially my Rush professors, once I reached out to one of them, they spread the news like wildfire. My friends spread the word as well. I have a lot of people to thank.

But if there’s anything to be taken from Nutakki’s fundraising journey, it should be the impact that one individual can make, amidst a pandemic or any other challenges we face in our communities.

“I don’t know if this is just being a med student or if this is just part of the game, but there’s always [the thought of], ’Well there’s other fundraisers going on, they’re raising more money than me! What am I doing wrong?’ For me, it was an important practice in taking a step back and saying, ’Let’s think about why you’re doing this and how you’re doing this.’”

“I don’t have social media, so it was me sending personal messages and emails to people that I knew...[and] reaching out with my parents to people they knew would want to help out. It was a reminder of “I’m doing what I can, and that’s the best that I can do.”

You can support Nuttaki’s fundraising efforts by donating here today.