Coal Mines to COVID: Researcher Leans on Past Experience to Become Leader During Pandemic

During the first surge of the COVID-19 pandemic in spring 2020, Brady Scott, PhD, RRT, began to realize that some of his earlier work might have an unexpected, significant payoff. He had been part of a team that years earlier learned about the benefits of proning patients in respiratory distress, and he now knew it had the potential to save lives.

Scott, an associate professor and director of clinical education of the Respiratory Care program at Rush University’s College of Health Sciences, used the proning technique to help lead Rush University Medical Center’s effort to address the most lethal COVID-19 symptom — acute respiratory distress syndrome, or ARDS. Proning, which is the process of turning patients onto their stomachs in bed, emerged as a literal lifesaver.

As the intensive care unit at Rush received more and more gravely ill patients, Scott and other clinician-researchers continued to study proning, successfully using it with "awake" patients, a term used to describe patients who are not on ventilators. Scott had not seen proning used in that way before.

"Being involved in the research has taught us better ways to treat our patients," he says. "Proning has been tremendously important in saving lives.”

For his efforts, Scott was recently honored with the Charles H. Hudson Award from the American Respiratory Care Foundation. He’s in good company: The 2020 winner was Anthony Fauci, MD, chief medical adviser to the president for COVID-19. The award recognizes Scott’s op-eds about the importance of respiratory care and his interviews with the media, both before and during the COVID-19 pandemic.

"I want to make the case that we're not the front lines of the pandemic; we're the end of the line," Scott says of the respiratory care practitioner’s role. "The front lines consist of the people who are wearing the masks, practicing social distance, getting vaccinated. We're there when people don't do those things."

‘Proning is not easy’

As for proning, it has been used in hospitals for decades. But while the practice was known to relieve lung compression, improve oxygen levels and reduce the number of lung injuries caused by ventilators, proned patients still seemed to die as often as those who were not proned.

That changed in 2013 with the results of the French PROSEVA (Proning Severe ARDS Patients) clinical trial, which showed that proning could significantly reduce mortality for ventilated patients with ARDS, compared with a control group that was not proned.

“PROSEVA had the right recipe for effective proning: Do it early in the course of ARDS, do it for a long time (at least 16 hours) and use lung-protective mechanical ventilation strategies for ARDS," Scott says.

After that, Scott, became an enthusiastic advocate of the procedure. Proning, however, “is not easy,” he says.

"Being involved in the research has taught us better ways to treat our patients. Proning has been tremendously important in saving lives.”

In 2018, Scott was the faculty investigator on a student-led project to train clinicians in the intensive care unit, or ICU, to prone a patient manually. That group included respiratory therapists, nurses and physicians.

Manual proning means flipping the patient over on their belly with all the attachments that go with a very sick patient — breathing tube, intravenous lines, catheters and monitor leads — without the help of specialized beds. Most candidates for proning are very ill, so they are likely already on a ventilator. The Rush study training program consisted of a discussion of the protocols that would be used, video demonstrations and practice with a simulation that employed standardized patients of various sizes and weights.

"We figured out how to do it, and we improved the confidence of our team, which is key,” Scott says. “As a result, we had a blueprint for how to do this well before COVID hit.”

The early stories of COVID-19 from Asia and Europe were unsettling for the American medical professionals who deal with extreme lung distress, Scott recalls.

"It was like a train wreck coming toward us, and we couldn't stop it," he says. "We started preparing our teams to deal with it."

COVID-19 gave Rush's well-prepared ICU clinicians a baptism by fire on proning. Scott and his team published several studies of what they saw, including the discovery that "awake" proned patients — seriously ill but not on a ventilator — had a reduced incidence of treatment failure (defined as death, or needing to be intubated, within 28 days of enrollment) than those who were not proned, indicating that at least some patients might be able to avoid the use of a ventilator altogether.

Scott thinks awake proning may become a common treatment for ARDS, thanks to research done when the technique was pressed into service to treat COVID-19. He is proud of Rush's role not only in leading-edge studies but also in treating patients throughout the COVID-19 pandemic.

"We were built for this, quite literally," Scott says. Rush's Tower hospital building, which opened in 2014, was designed to handle large-scale health emergencies, such as a pandemic.

"We're not the front lines of the pandemic; we're the end of the line. The front lines consist of the people who are wearing the masks, practicing social distance, getting vaccinated. We're there when people don't do those things."

In addition, "we still had an academic program to run," says Scott, whose duties now are ordinarily about 80% academic and 20% clinical. "We had to switch everything up to keep students moving toward graduation.

"I've never seen the kind of teamwork before that we had during COVID. It was really nice to see people working together to achieve the best possible patient care. I hope that's one of the lessons learned from COVID: that we can always do that — be effective, communicate, work together with respect and camaraderie."

A family of coal miners

Scott grew up in a family of coal miners in Garrett, Kentucky. His grandfather had black lung disease, an occupational condition associated with mining, and his father briefly considered a career in respiratory therapy himself after suffering an injury in a mine accident. 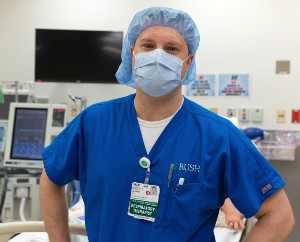 Scott's route to his present role started in the respiratory therapy program at Lexington Community College in Kentucky, with the hope that training for a job in health care would give him a secure, steady paycheck. He had previously taken some nursing courses, but he "never quite got in the groove" with nursing.

"I enjoyed the depth we went into in respiratory therapy,” Scott says. "I enjoyed learning about respiratory physiology and mechanical ventilation and arterial blood gas analysis. I felt like I had found what fit me well."

He went to work in respiratory care at Duke University Medical Center in Durham, North Carolina, and was a clinical supervisor before he went back to obtain his bachelor's degree online from the University of North Carolina at Charlotte.

Soon after that, a mentor put Scott in touch with David Vines, PhD, MHS, RRT, chair of the Department of Cardiopulmonary Sciences in Rush University’s College of Health Sciences. Vines was looking for a clinical educator coordinator.

"I felt grossly unqualified, and I told him that," Scott says.

"They saw something in me that I didn't see in myself,” he says. “Immediately after I got to Rush, I started working on my master's degree in respiratory care.”

In the beginning, his duties were about 70% clinical. All his educational accomplishments, including a PhD from Rush, came as Scott worked full-time.

He says the pandemic has made him appreciate his profession even more. "Respiratory therapists play a tremendously important role at the bedside in terms of improving outcomes," he says.

And Scott says he has gained a new perspective on life.

“It’s made me appreciate the little things more, simple things like going out for a walk with my wife and my daughter and the dog,” he says. “It’s helped me slow down and smell the roses.”