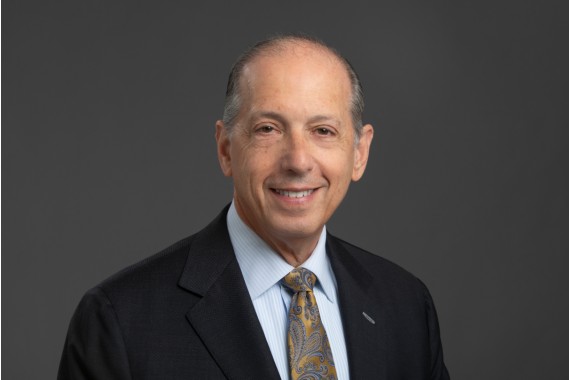 His tenure as CEO includes the following highlights:

Continued financial strength has enabled the Medical Center to invest in past and future major construction projects to modernize its main campus and enhance care and new off-campus outpatient facilities. In addition, Rush's financial performance supports new programs to improve care, advance research, assist the surrounding community and develop the capabilities of Rush employees. It also made possible the $370 million in community benefits the Medical Center provided during the 2018 fiscal year, including $25.6 million in charity care.

Generous philanthropic support has been crucial to this success and reflects the confidence of donors in the Medical Center's future, its mission and its careful stewardship of their gifts. The Campaign for Rush, which took place from 2004 to 2012, was the most successful fundraising campaign in Rush’s history, raising $389 million and exceeding its $300 million goal.

The 2019 fiscal year set a record for annual giving, with $97.7 million raised. This achievement included the largest single donation in Rush's history — a $45 million grant from the Wounded Warrior Project to the Road Home Program: The National Center of Excellence for Veterans and their Families at Rush.

Donor gifts also have established 10 endowed chairs at Rush University during Goodman's time as the University's president, helping attract and retain scientist and educators of the highest quality to advance Rush's teaching and research endeavors.

Campus transformation: In 2005, the Medical Center began a $1 billion comprehensive renovation of its campus on Chicago's West Side. The Rush Transformation, as it was called, included the demolition of the oldest buildings on the campus, which dated back to the 1800s, and the construction of a state-of-the-art hospital Tower, which opened in January 2012 and is now one of Chicago's most recognizable landmarks.

The Tower's ground floor houses the Robert R. McCormick Foundation Center for Advanced Emergency Response, which encompasses the emergency department and its day-to-day operations. The first of its kind in the United States, the center is designed to provide an unprecedented level of readiness for large-scale health emergencies from a mass outbreak of an infectious disease — a bio-terrorist attack or an accident that spills hazardous materials.

A few months after its opening, the Tower received Leadership in Energy and Environmental Design (LEED) gold certification, which recognizes organizations that design and construct environmentally responsible and efficient buildings.

The Rush Transformation also included the implementation of an electronic medical record system, Epic, throughout the Medical Center in 2009, which enhances the continuity and coordination of care, and communications with patients about their health.

Already, another major capital improvement to the Medical Center campus is under way. Rush is building a 10-story, state-of-the-art outpatient care and neuroscience center at the northeast corner of Ashland Avenue and Harrison Street, directly across Ashland Avenue from the Tower. The project will include an enclosed, fourth-floor walkway connecting the two buildings.

The outpatient center will be focused primarily on cancer and neurological care, and is being planned and designed around the diagnostic and treatment needs of patients who are increasingly receiving routine and often complex medical care in physician offices.

Additionally, construction of a new, $30 million emergency department at Rush Oak Park Hospital, which was completed in 2019, now accommodates the growth in volume of visits to the department and provides enhanced care.

Formation of the Rush System: In March 2017, Rush University Medical Center, which administratively encompasses Rush Oak Park Hospital in Oak Park, Ill., and Rush Copley Medical Center in Aurora, lll., completed the process of reorganizing their operations under a common corporate parent led by a board of trustees, creating the fully integrated Rush University System for Health. Originally known as the Rush System for Health, the system officially added University to its name in March 2019 to properly reflect its identify as an academic health system.

The system includes the university, three hospitals and their respective subsidiaries and affiliates and numerous outpatient facilities located throughout the metropolitan Chicago area. The Rush System fully integrates clinical, research, education and community engagement work, providing a single, high-level of quality and commitment to the communities Rush serves.

In fiscal year 2018, the Rush System's hospitals had a combined annual total of 49,294 patient admissions, 181,126 emergency department visits and more than 1 million outpatient visits, with annual operating revenue of greater than $2 billion.

More people providing more care: Along with campus improvements, Rush's staff has grown to meet the dramatic increase in demand for care during Goodman's time as CEO. In fiscal year 2018, Rush University Medical Center and Rush Oak Park Hospital had 1,532 members on their medical staff, compared to 927 in fiscal year 2002, Goodman's first as CEO, and 11,649 full-time employees, compared to 8,648 in 2002.

Excellence in patient care: The growing number of patients who choose Rush reflects the exceptional quality of the care Rush provides, which has earned the Medical Center the following honors:

In addition, Rush has partnered with other area health care providers to make Rush services available through them. These partnerships include cardiology services at Mercy Hospital and Medical Center on Chicago's South Side and cancer care at DuPage Medical Group in Lisle. In addition, Riverside Medical Center in south suburban Kankakee became a member of Rush Health, Rush's network of care providers, in 2014.

Rush University doubles enrollment, expands scope: Rush University more than doubled its student enrollment during Goodman's time as the University's president, from 1,231 students in the 2001-2002 academic year to 2,708 in the fall 2018 semester.

This dramatic growth included the creation of multiple academic programs to prepare future health care professionals to meet the ever increasing need for care. Among these programs are the Generalist Entry Master's (GEM) Clinical Nurse Leader program for students who already have a bachelor's degree in another field and want to pursue a career in nursing; and the Bachelor of Science in Health Sciences degree program, which prepares students for either entry-level careers in health care or graduate-level health professions studies.

Thriving research enterprise: Rush's $95 million in research revenue in fiscal year 2018 was the most of any year in Rush's history and a nearly 60% increase on the $60 million in FY '02. The $71.9 in National Institutes of Health awards last year also was a record.

In 2018, Rush became the co-leader, along with the University of Chicago, of the Institute for Translational Medicine — a health research accelerator launched in the Chicago area with nearly $35 million in funding from the National Institutes of Health. The ITM – which also includes Advocate Health Care, the Illinois Institute of Technology, Loyola University Chicago and NorthShore University HealthSystem – will help researchers speed the process of turning research lab discoveries into new patient treatments.

Addressing health inequities and their causes: Rush has committed the institution to reducing inequities in health and longevity that exist between residents of the West Side communities near the Medical Center and more affluent neighborhoods. In four of the past five years, the American Hospital Association has chosen Rush as an honoree for the Equity of Care Award in recognition of the Medical Center’s efforts. These initiatives include an innovative technology partnership and screening protocol to identify patients who lack sufficient food, housing and other needs and match them with resources that can help.

In addition, Rush is putting its strengths to work to alleviate underlying causes of poor health and reduced lifespan on the West Side such as unemployment. Rush led the 2017 formation of West Side United — a collaboration between Chicago health care institutions, civic leaders and community residents that to address health disparities. The Medical Center also has begun making a planned $6 million in impact investments in the West Side over three years.

Furthermore, in the 2018 fiscal year, Rush hired more than 300 employees from these neighborhoods as part of a commitment to hiring at least 1,000 West Side residents over three years. The the 2019 fiscal year, Rush also reallocated $400,000 of its purchasing to vendors in the anchor communities.

Before his appointments as CEO, Goodman served as senior vice president of medical affairs and dean of Rush Medical College. From 1995 to 1998, Goodman was the medical director of John H. Stroger, Jr. Hospital of Cook County. Before that appointment, Goodman served at Rush University Medical Center as an infectious disease specialist, associate dean of Rush Medical College and assistant dean of clinical curriculum.

Goodman is a 1976 graduate of the University of Michigan Medical School, and he completed a residency in internal medicine and a fellowship in infectious disease at Rush University Medical Center. During his fellowship he served as chief medical resident before joining the faculty.

Goodman serves on the Board of The CORE Foundation, a model public-private venture between Cook County and Rush University Medical Center that established The Ruth M. Rothstein CORE Center, which cares for approximately 7,000 patients with HIV/AIDS. He is a member of the Commercial Club of Chicago and a board member of its Civic Consulting Alliance, which provides pro bono consulting services to the City of Chicago and Cook County in areas of greatest public need. Goodman also is a member of the Board of the Joffrey Ballet.