When Sonya Daguinsin saw an ad for Castle Orthopaedics & Sports Medicine on Facebook, she had to respond.

“Dr. Akoh is amazing,” she posted about Craig C. Akoh, MD, an orthopedic surgeon specializing in foot and ankle problems at Castle Orthopaedics. “Phenomenal bedside manner and makes you feel like you are his only concern. I believe that he and my care team at Rush Copley are the only reason I still have my foot and ankle.”

Sonya’s story began when she went to Rush Copley’s emergency room with a painful, swollen ankle. She was referred to Akoh who ordered an MRI and determined she needed surgery right away for her infected ankle. Akoh cleaned out the infection by debriding it — surgically removing skin and bone in the infected area. Sonya says her ankle was extremely painful, but the surgery relieved her intense pain immediately.

In caring for Sonya, Akoh collaborated with Harkamal Rehal, MD, an infectious disease specialist with Fox Valley Medical Associates, to determine the cause of Sonya’s infection. Diagnosis proved to be a challenge — it took multiple attempts to grow the fungus in the lab.

Sonya was discharged from the hospital, but a week later, she required a second surgery to clean out the infected ankle again.

Fortunately, by that time, the fungus had grown in the lab, and the doctors diagnosed Sonya with blastomycosis just two hours before the surgery. Blastomycosis is an infection caused by a fungus found on farms and in moist soils. Recovery is long, and she will be on medication for a year.

“Only five people a year get sick from this,” Sonya says, “and no one understands where I got it.”

Looking back now, Sonya appreciates the way Akoh and Rehal worked together and included her in treatment decisions. When a third ankle surgery seemed imminent, Akoh got Rehal on the phone so the patient and her two doctors could speak together to collectively make a decision. Together, they decided to postpone the surgery a few days and, ultimately, avoided another surgery.

“Dr. Akoh answered every question I had,” she says. “If he was halfway out the door and I asked another question, he would come back in.” He always made sure she was ready before he started a procedure that might be painful, and he personally packed her wound every day.

“He really cares that his patients aren’t in pain,” she says.

Sonya is especially grateful for Akoh’s quick action. She believes she would have lost her foot and ankle if he hadn’t started the initial scans and surgery immediately.

She also credits Rehal for her important role in diagnosing the cause of her infection.

Sonya says, “It was a Rush team effort.” 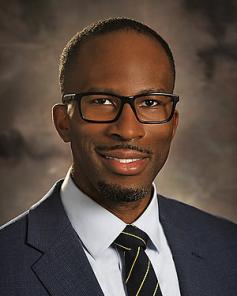